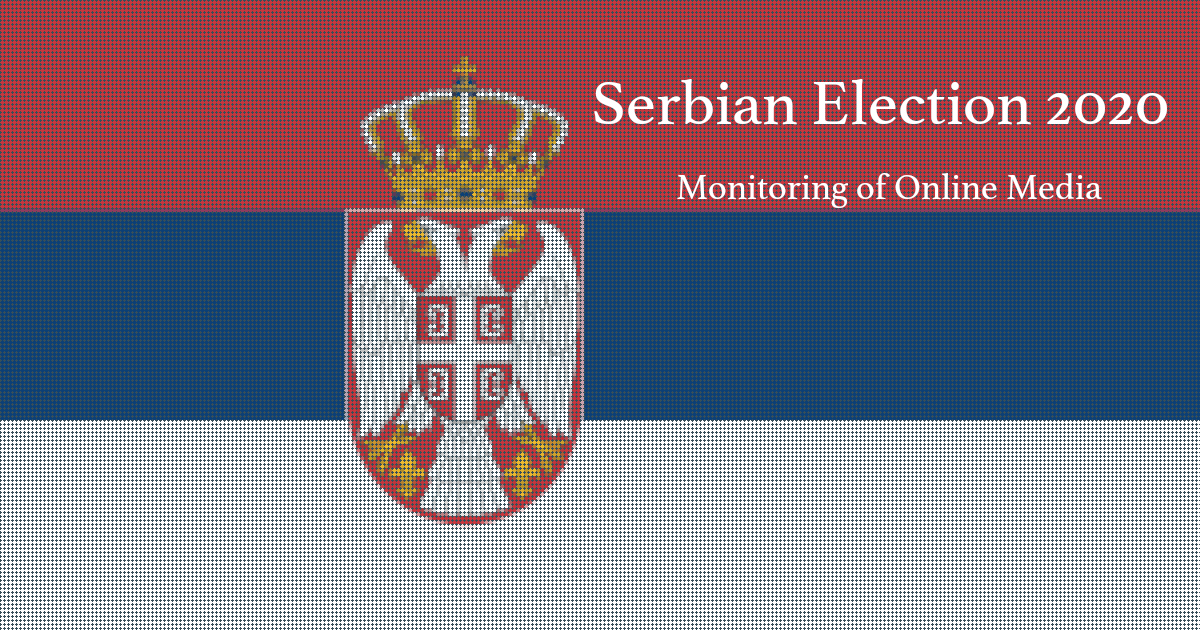 Media Monitoring Ahead of Serbian Elections During COVID-19

IRI’s Beacon Project, in partnership with Belgrade-based BIRODI monitored media coverage of election-related topics across 6 leading local media online outlets ahead of parliamentary elections in Serbia. The media monitoring covers a period of September 2019 - June 2020. The primary goal was to assess the impartiality of the media by monitoring the number of articles referring to politicians and the tone of coverage. The elections, originally slated for April 2020, were postponed to late June due to the spread of COVID-19, which also dominated the news.

IRI adjusted its monitoring methodology to the new circumstances adding two new topics - Healthcare and Economy, which were dominating public discourse. Between March 1 and May 31, IRI monitored these topics in the selected media and coded 3,722 unique articles to see how they influenced the election environment and coverage of politicians. More precisely, it tracked how selected online media portrayed government’s response to COVID-19. The monitoring also continued to follow coverage of Serbian political actors and the topic Free and Fair elections. For more a detailed background on the Serbian Election and methodology see the Beacon Project’s Introduction page to the Serbian Elections.

Analysis of the Healthcare and Economy topics shows that government’s handling of COVID-19 was portraited in media in neutral to positive light. Less than 7% of articles criticized the way how government handled the economic situation and less than 3% were negative about government’s coordination of healthcare during the COVID-19 crisis.

One of the rare articles negatively assessing the government’s economic measures was published on rs.n1info.com:“Atanacković [Serbian Union of the Employers] pointed out that workers will not be the only victims and he assessed that in the upcoming period a large number of business entities will be closed. He sees the state measures for help to economy came too late and adds that by now, support should have been given to the most vulnerable, small enterprises and entrepreneurs.”

Another negative article was related to claims of Montenegro’s officials regarding the alleged confiscation of respirators by the government of Serbia: “Director of the Healthcare Fund Sead Čirgić said to Vijesti earlier that out of five respirators which the Fund ordered from a Swedish producer, three were held at the border with Serbia yesterday and later confiscated as well.”

Some journalists claimed to having been prevented from criticising the government by law-enforcement authorities. Ana Lalić, journalist of the portal Nova S, who was reporting about inadequate and chaotic conditions in Vojvodina Clinical Center, was arrested and spent a night in custody. Similarly, in Zrenjanin a media crew was detained in custody for 48-hours after reporting on the auction of state land, after being accused of disobeying healthcare regulations during the pandemics.

Coverage of the government's handling of both the economy and healthcare was largely positive at 53% and 47%, respectively.  However, when examining the articles specifically mentioning Vučić the percent of favourable coverage for both topics is 72% (*click on the Vučić filter to see the charts at the bottom change to reflect articles discussing economy and healthcare that mention Vučić specifically*). Online media highlighted Vučić’s dedication to providing adequate health care services and materials. For instance, in an article about the procurement of respirators Pink.rs wrote: “As he [Vučić] says, they [government] took care so the people will get everything and, he adds, they will have more than has New York, Madrid and London.”

These two topics were selected for closer monitoring as it was posited that most of the political discussions in media would be related to the evaluation of the government's response in this situation. However, despite the presence of politically sensitive issues, such as the introduction of curfews, bans on gatherings or procurement of medical material largely discussed in other European countries, less than 40% of articles related to this topic reported on government responses. Moreover, those media which did cover them did not question the methods or actions and consequently the media coverage was mostly positive. Despite both topics being strongly present they did not drive the political discussion.

Discussion about free and fair elections took only a marginal part of the media space (552 articles in 3 months). Despite the inability to run political campaigns beyond online and over the TV, neither the campaigning nor the discussions about election conditions moved significantly online. One could argue that political discourse moved away from this topic due to the postponement of elections and pause on all electoral activities declared during the state of emergency.

However, the spread of COVID-19 impacted not only on public health but also political standpoints towards elections. One part of the previously boycotting opposition decided to participate after all and, on the other hand, the weakening of the boycott strategy seemed to push their candidates to extreme actions,  such as Boško Obradović’s, leader of Movement Dveri, hunger strike in front of Serbian Parliament.

Monitoring results indicate that COVID-19 didn’t negatively impact the government’s public image but did likely influence a decrease in the media presence of opposition parties as a Free and Fair Elections topic. Though previously publicly discussed in relation to opposition, it was less covered. Descriptive reporting largely based on simple citation of leading political actors prevails even in times as turbulent as the COVID-19 pandemic when it would be expected that online platforms of leading national media outlets would offer balanced representation of different points of view. The inability of the media to express positions on events and decisions directly affecting lives, safety and freedoms of Serbian citizens deserves closer analysis.