The following is an edited version of a report published by Ernestas Taranas of the Vilnius Institute for Policy Analysis with support from the Beacon Project. The views expressed below are those of the author and do not represent the views of the Beacon Project or the International Republican Institute.

In the wake of COVID-19 pandemic, Belarus’ democracy movement and 2020 Lithuanian parliamentary elections pro-Kremlin media is expected to propagate sensationalist media coverage that aims to disrupt such democratic processes and disperse misinformation regarding the coronavirus preparedness, readiness and response actions. Research demonstrated that Russia recycled toxic narratives as well as created new ones in order to undermine Belarusians’ right to participate in democratic elections. Disruptive anti-establishment narratives were also observed in Lithuanian-language media which were specifically designed to undermine current government’s legitimacy and sway voters toward more radical and populist forms of governance.  Fortunately, no major disinformation campaigns regarding the novel coronavirus in Lithuania were observed. However, it should be noted that it is crucial to keep a close eye on possible misinformation regarding future vaccinations against the COVID-19 disease.

The famous “Baltic Bubble” has burst leaving citizens of Baltic nations unable to move freely within the three countries. The decision to kill the travel bubble came from Latvia after the epidemiological situation in Estonia and Lithuania had worsened considerably. Currently, Lithuania is experiencing a heightened sense of alertness as the number of confirmed COVID-19 cases in the country continues to increase by hundreds. Therefore, as countries across Europe are closing down once again in preparations for a second COVID-19 wave, Lithuania has followed suit with preventative measures and re-introduced the mandatory use of protective facemasks in most public spaces as of 1 August.

After widespread vote-rigging and explicit indications of fraud in Belarus’ presidential election, Lithuania has taken on the leading role in supporting Belarusian civil society and championing for its opposition. Sviatlana Tsikhanouskaya, the main opposition candidate, was granted asylum in Lithuania in August, while the Lithuanian parliament, Seimas, adopted a resolution calling for non-recognition of Lukashenko as a legitimate leader of the country. Additionally, a list of national sanctions against the Belarusian regime has been issued preventing Lukashenko and his inner circle from entering the country.

Despite major political unrest in Lithuania’s neighbour, Belarus, and a COVID-19 outbreak in Europe, the democratic processes in Lithuania must continue. The country is beginning its two-round parliamentary elections with the first round being held on 11 October. Currently 22 parties are grappling for the attention of Lithuanian voters during weekly debates. Additionally, this electoral year will be slightly different for citizens living abroad who will have the chance to vote for candidates in a special single-member constituency established for Lithuanian expats. According to the latest polling at the time of publication, the election is poised to be similar to the 2016 elections with the Homeland Union – Lithuanian Christian Democrats (TS-LKD) and the Lithuanian Farmers and Greens Union (LVŽS) expected to remain the top vote earners. Other major established political parties, the Lithuanian Social Democratic Party (LSDP), the Labour Party (DP), and the Liberal Movement (LRLS) have similar polling numbers. However, joining these more established parties could be the newly formed (2019) socially liberal Freedom Party (LP). Follow Politico’s Poll-of-Polls for recent polling and context to previous election cycles.

Over the period of two weeks (1 August – 16 August) both Russian- and Lithuanian- language media was surveyed. The main goal of the monitoring was to identify what outlets leaned towards ‘anti-elitist’ populist thought and analyse toxic narratives spread by the pro-Kremlin media. Four topical focal points were chosen – Lithuanian parliamentary elections, Belarusian elections, the Astravets Nuclear Plant and the COVID-19 pandemic. To identify topic-related articles a set of keywords was used. Data was collected using the International Republican Institute’s (IRI) media monitoring tool >versus<.

Lithuanian-language media focused its attention on two main topics with respect to the COVID-19 response: corruption and restrictions.

The former focused on the resignation of Lithuania's Deputy Health Minister Lina Jaruševičienė, who was named a suspect in an abuse-of-office investigation. According to a number of articles observed in major Lithuanian media, Jaruševičienė was suspected of abusing her powers of office, which led to large-scale financial damage to the state. The inquiry focuses on alleged fraud, document forgery, legalisation of illegally obtained funds and abuse related to procurement of rapid coronavirus tests.

The latter topic focused on the possibility of additional restrictions on travel and the re-introduction of mandatory face coverings. As of August 1, face masks once again became mandatory on public transport and in enclosed trade and service areas. The decision was approved by the Minister of Health and the Head of State Emergency Operations. Additionally, a number of articles focused on Rolanda Lingiene’s, the director of the National Public Health Center's Vilnius Department, calls to postpone trips to neighbouring Poland as the country was about to blacklisted due to dangerous level of COVID-19 cases.

As Lithuanian leaders condemned Belarus’ rigged elections and refused to recognise Alexander Lukashenko as the legitimate leader of Belarus, thousands of Belarusians have taken to the streets in opposition to the authoritarian President. Moreover, Belarus' leading opposition candidate, Sviatlana Tsikhanouskaya, fled to Lithuania in fear of imprisonment. After such events, pro-Kremlin media operating in Lithuania swiftly reacted by ridiculing and distorting statements expressed by Rasa Juknevičienė, a Lithuanian MEP and Vytautas Landsbergis, first head of the state of Lithuania.

The Astravets Nuclear Power Plant, residing only 65km from the Lithuanian capital in the Belarussian city of Astravets, was high on the political agenda and will remain so until its full launch in 2021. Back in August the first head of independent Lithuania, Vytautas Landsbergis, once again expressed his concerns that the power plant was the Kremlin's project aimed to expand and punish Lithuania for its independence. Afterwards, a pro-Kremlin media outlet - bukimevieningi.lt - satirically coined the Belarusian Nuclear Power Plant as “Landsbergis’ bomb". Consequently, we anticipate to see more disinformation regarding this topic in the following weeks.

With respect to the Lithuanian Parliamentary Elections we noted that several media outlets had already began shedding the light on the race for a parliamentary mandate. However, one exceptional trend can be singled out for closer examination are well-known disinformation channels appear to publish article's referencing – Lithuania’s Labour Party founder, Viktor Uspaskich at a higher rate. The 7 articles account for 22% of all the articles referencing Uspaskich, compared to the next highest receiver of coverage from these sources being Karbauskis which only accounts for 8% of his total number of references from 01-16 August. Text and sentiment analysis showed that Viktor Uspaskich's coverage has been critical of both incumbents and opposition parties.

The below chart shows the number of Lithuanian-languages articles surveyed. According to this chart lrt.lt (81 articles), klaipeda.diena.lt (71 articles) and delfi.lt (65 articles) focused the most on topics of Belarus elections, the Astrvets Nuclear Power Plant, COVID-19, and the Lithuanian Parliamentary elections. The total number of articles observed was 554. 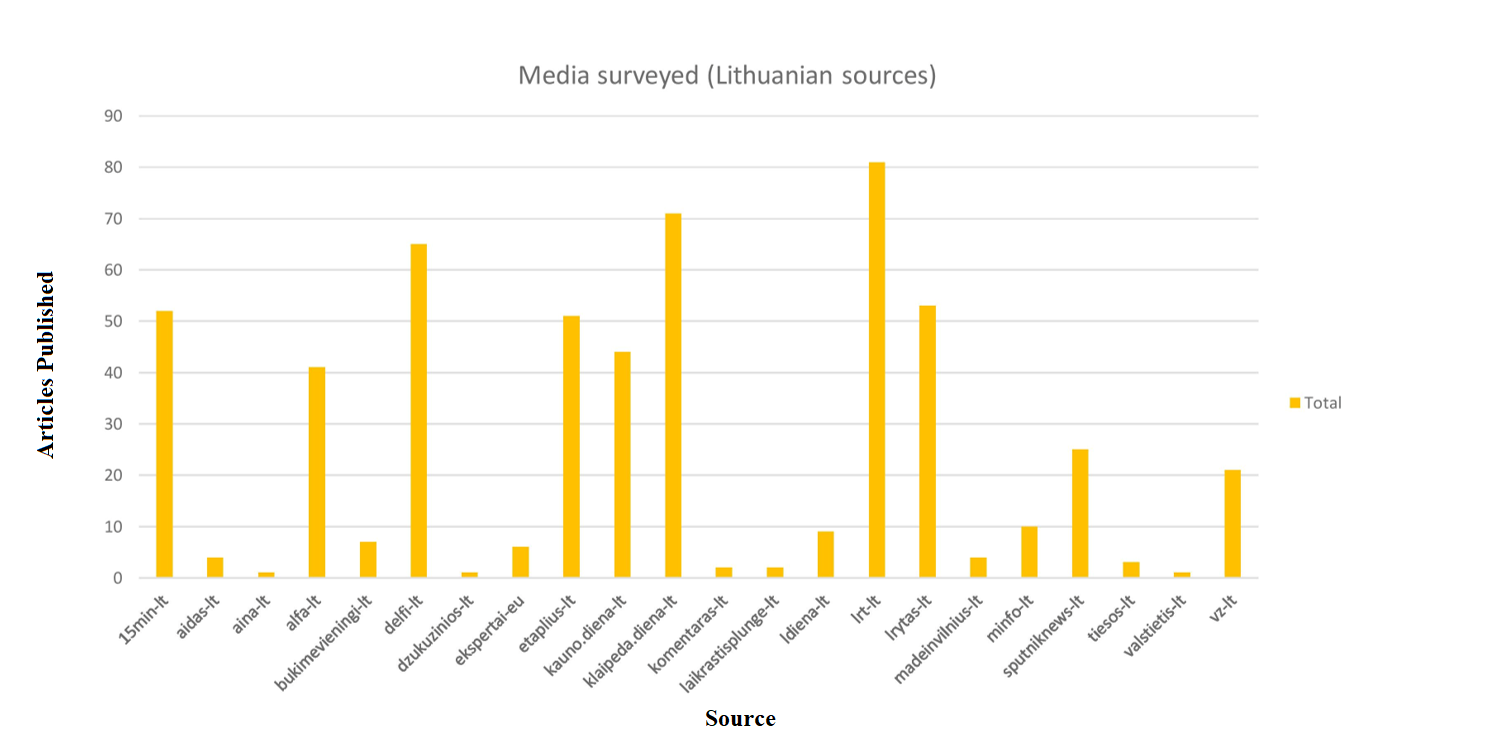 Russian-language media monitoring demonstrates that while news stories on COVID-19 response were localized and thus adapted to Russian-speaking audiences, other topics, such as Belarusian elections received a significantly larger portion of original content in the form of commentary. A significant increase in articles with anti-EU sentiment could be also observed with elements of sarcasm, political satire and ridicule. For instance, Sputnik News published an article claiming that Lithuania‘s interest is to create another banana republic on Russia‘s doorstep, where even larger NATO forces could be deployed for a possible military actions against Russia. While eadaily.com, reporting on Belarus‘ refusal to let two Polish and Lithuanian MEP‘s into the country, sarcastically referred to Robert Biedroń and Petras Auštrevičius as “specialists on democracy.”

When it comes to election reporting, only three media outlets kurier.lt, nedelia.lt and obzor.lt localized election-related content. Content analysis found that these outlets work closely with the Baltic News Service on editorial productions covering the upcoming parliamentary elections. Therefore, all election-related articles are of neutral sentiment and focused on future relations with Belarus.

Analysis showed two additional trending topics that could be singled out. The first concerns coordinated EU sanctions against Belarusian regime while the second focuses on Belarus’ increased military presence on the border with Lithuania.

In this monitoring period only two Russian-language articles concerning Astravets Nuclear Power Plant were published. However, as the launch date approaches, we expect to see more coverage on this topic on both Lithuanian and Russian language media. 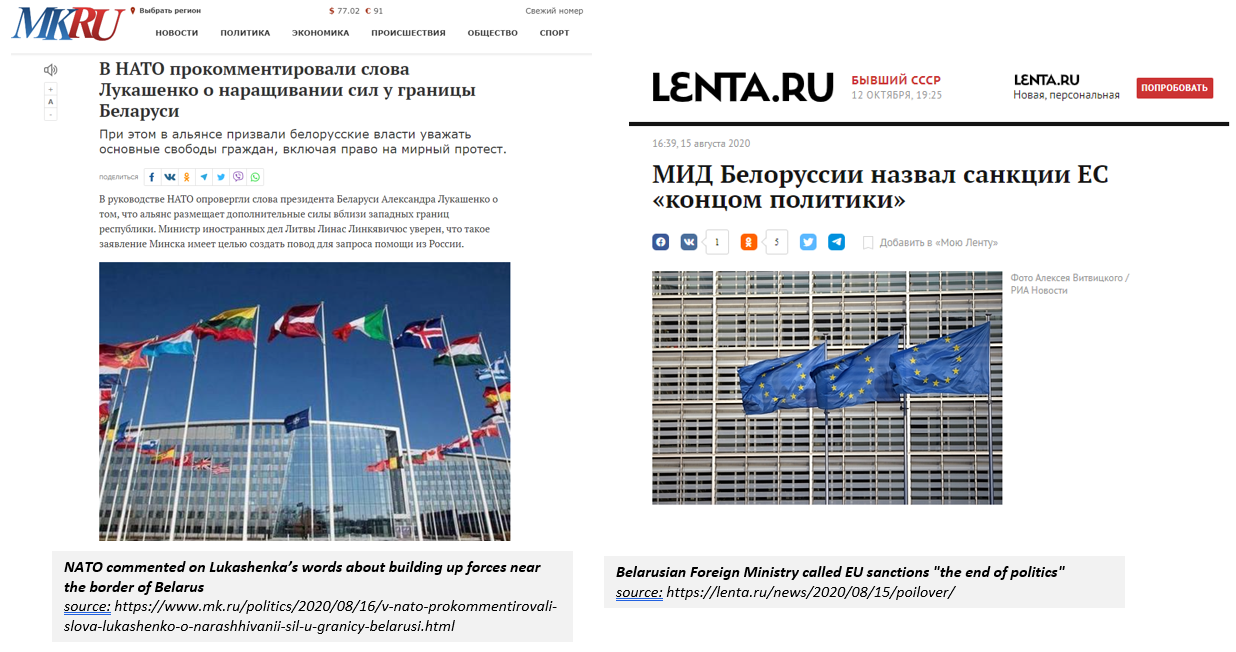 Results showed all four aforementioned topics received enough media attention to be observed in the August 17 – August 31, 2020 media monitoring period. We expect to see more disinformation regarding the integrity of Belarus’ election as Lithuania has become regional leader amid Belarus crisis. The Astravets NPP topic is expected to be further developed in both Lithuanian as well as Russian language media. However, instead of plain disinformation we expect to see some forms of misinformation using the ‘ridicule, threaten distort.’ With respect to the  2020 Lithuanian parliamentary elections we anticipate to see more articles promoting marginal political parties (Labour Party, Electoral Action of Poles in Lithuania, Freedom and Justice, National Rally, and Russian Alliance) thus reinforcing populist political discourse. Yet, we do not expect to identify major disinformation campaigns regarding COVID-19 pandemic in Lithuania as no widely known “anti-mask” or “anti-vaccination” movements are known to us. However, to fully understand the scope of this issue it would be advisable to conduct a thorough comment section analysis on both Facebook and traditional media platforms to better comprehend the scope of current attitudes and the level of misinformation floating in online commentary bubbles.