Parliamentary elections took place in Romania on 6 December 2020. The Bucharest-based Global Focus Center, in cooperation with IRI’s Beacon Project, monitored online and social media to examine the prevalence of toxic narratives in the political discourse in the election period. Using the Pulsar media monitoring tool, researchers followed dozens of outlets as well as social media pages of prominent political players over the course of several weeks. The results, analysis and methodology, can be found in the four reports published below – and on Global Focus’ site.

Parliamentary elections were held in Romania last Sunday,  December 6, amid Covid-19 case numbers near their all time peak and an increasingly unpopular incumbent government led by the National Liberal Party (PNL) of Ludovic Orban. With opinion polling indicating a slim margin of victory for the PNL, their support was trending downward to the benefit of the main opposition Social Democratic Party (PSD). Initial results indicate that this late shift in opinion may have been enough to give the PSD a narrow lead over the PNL to come out on-top. 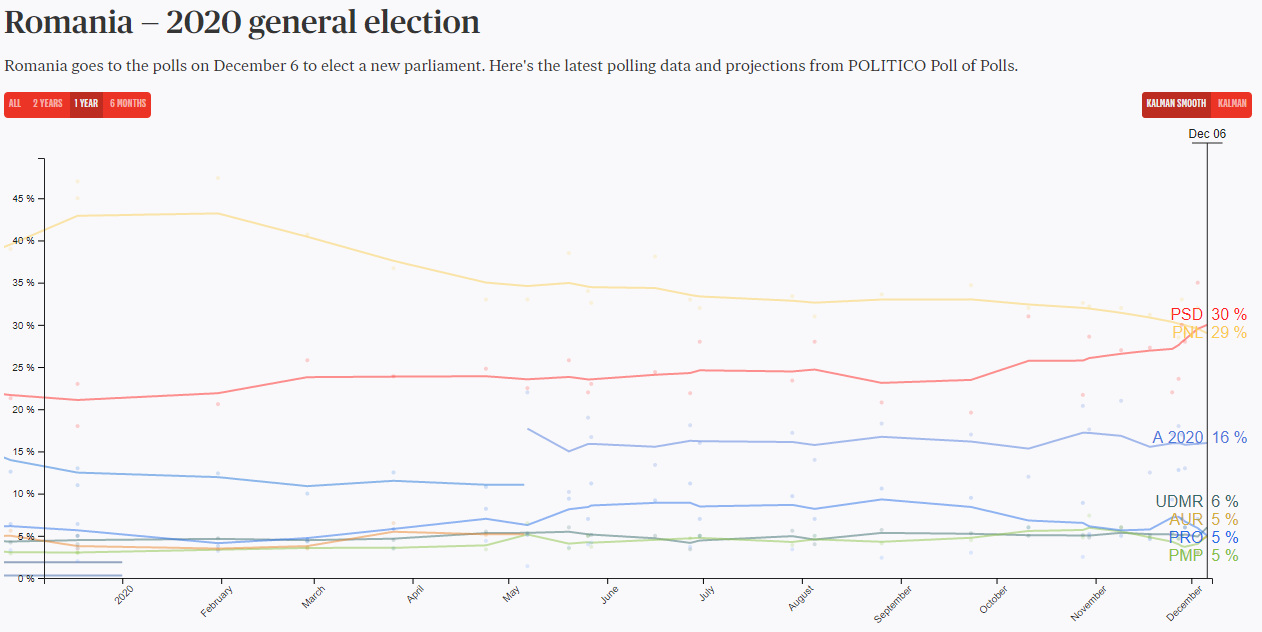 During the run-up to the election IRI’s Beacon Project partnered with one of the leading Romanian disinformation research institutions, Global Focus, to monitor the media content of leading media outlets as well as the Facebook accounts of leading political actors.

This report has been prepared with support from IRI's Beacon Project. The opinions expressed are solely those of the author and do not reflect those of IRI.

The electoral discourse has been largely clean, though not civil. The parties have, as usual, announced that if they do not win the election, the country will be facing a crisis. In general, candidates and major outlets did not indulge in aggressive conspiracy theories, with no substantial elector fraud allegations being found

Four reasons can be surmised at this point:

All this has proven somewhat of a challenge for short-term research. Some expected toxic narratives were missing, which is always a good thing. Others were indistinguishable from legitimate criticism that one might bring on a political adversary.

COVID – as expected, is an omnipresent theme, connecting and penetrating all the others. Although it has been discussed in a politically polarising way, the discussions did not employ particularly “toxic” language and remained free of significant conspiracy allegations. That is not to say Covid conspiracies are not present in Romania, but they do not appear in our research as having significant electoral influence. About 10% of the posts or articles of the sampled parties and party communications touch upon it.

AUR – The emergence of a new nationalist right-wing party that fuses a segment of the unionist movement (advocating unification with Moldova) with a group that denies and relativises the crimes of the interwar fascists. While opinion polling put the party at or near the 5% threshold necessary for entering Parliament, they appear to have exceeded their expectations and initial results show they may have claimed closer to 9% of the vote. Significantly, the research found that Its communicators were able to punch above their weight in social media communications. The party’s leader George Simion was one of the most active and visible political figures on Facebook with over 2 million impressions (times appearing on Facebook user’s newsfeeds) which accounted for 30% of all the impressions monitored. While not present in the monitored media, they have also sent emails to their followers announcing that electoral fraud will take place: this suggests that it might be one of their lines of attack after the elections. 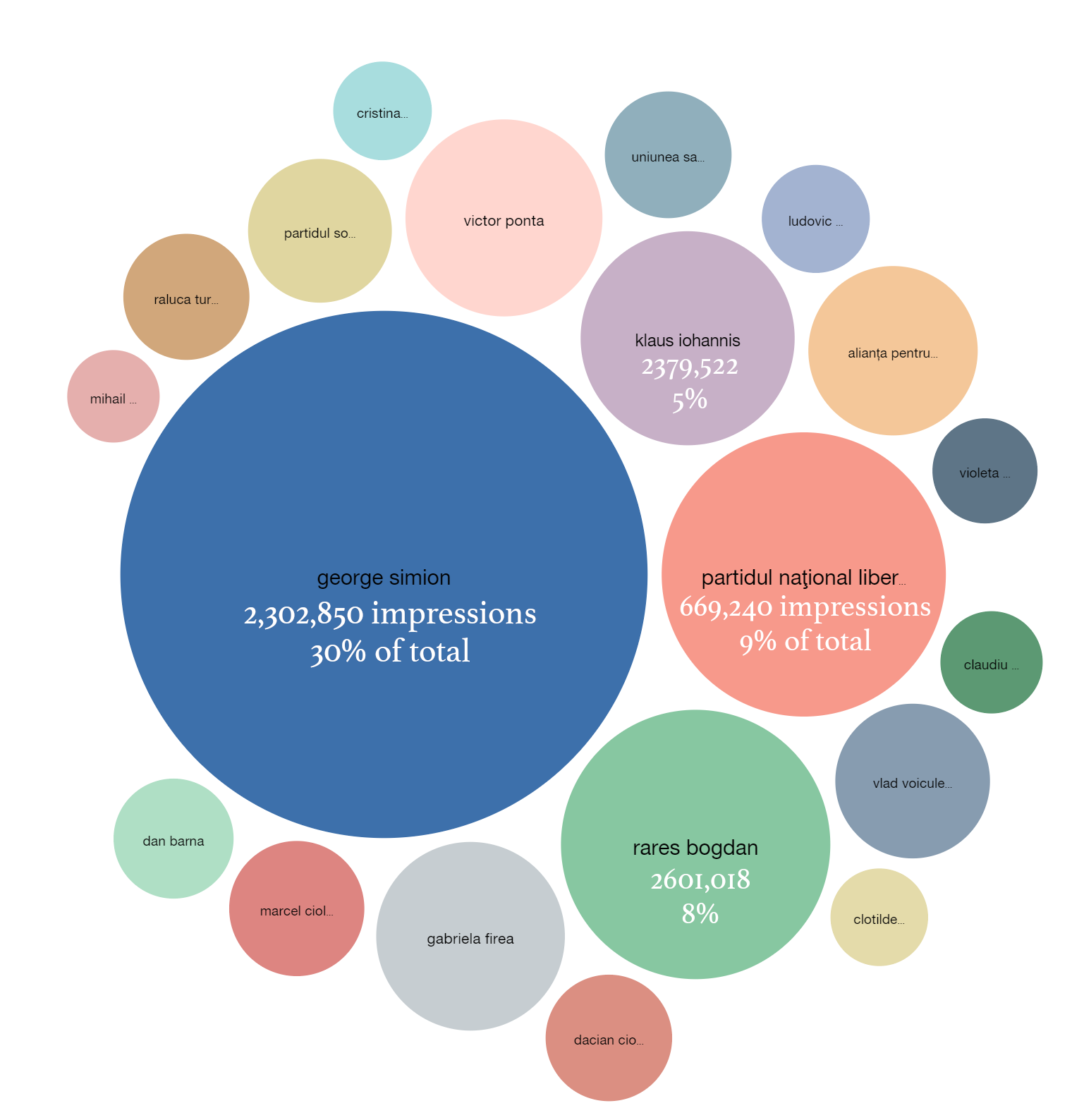 The Orthodox Church – Long considered an institution of political weight, it has been largely absent from the electoral conversation. This happens although it has been quite present in non-electoral conversations due to the insistence of local bishops (or even the Synod) to get exception from lockdown rules for various pilgrimages and religious services. It would appear that politicians have moved from an attitude of polite deference (if not outright pandering) to a more cautious approach.

The focus of conversations around Covid-19 and the public health crisis were highly focused on the poor infrastructure of the healthcare system. This was highlighted by a fire on 14 November in the ICU unit of a hospital in Piatra Neamţ. While the majority of coverage was free from disinformation, one narrative that was promoted by the leader of the opposition PSD, Marcel Ciolacu, was that the PNL led government were intentionally slowing down the number of Covid tests given so that the nation case numbers would appear lower.

The major conversations presented around economic issues were largely in-line with typical political divisions and were largely free of disinformation. The democratic-socialist party focused their narratives on a perception that the liberal party was supporting international companies and banks over the general population. The governments decision to close local indoor markets as part of their Covid response measures was used by the PSD to promote a narrative that the PNL did not care about the local agricultural sector and instead favoured larger commercial supermarket chains. 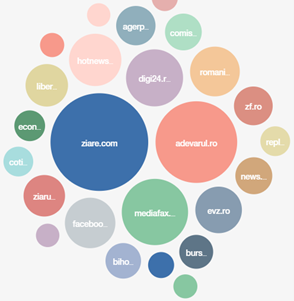 Despite being the central topics of debate in the past election campaign periods, due to the extraordinary public health situation now, this subject has been of secondary importance in this election. Nonetheless, notable narratives have been identified. One of the primary narratives identified is that the government’s anti-corruption efforts specifically target PSD associates in order to deflect from the shortcomings of the PNL. 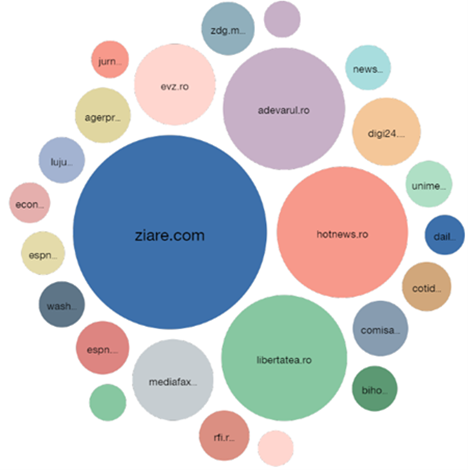 There were not significant narratives identified in this monitoring claiming electoral fraud. One instance was discovered in a fringe outlet and it was reported that the AUR party did sent out emails claiming there was some electoral fraud planned.

The research tested five areas of possible toxic discourse against three samples extracted by Pulsar. One sample is formed by the general media filtered down by specific keywords related to the five narratives and areas. Another is the discourse of the official parties’ social media pages. The third is the discourse of the main party communicators (who are thought to be potentially freer to express divisive views). The first sample has a dedicated media search, while the second and third were lumped together. The samples used for this report cover the period between November 23 and December 4.

(NB: samples do not include audio/video/still transcripts or Hungarian language material)