Despite longer queues and stringent hygiene measures due to pandemic, Lithuania’s 2020 Parliamentary Elections went rather smoothly. The Conservatives (TS-LKD) sealed victory with 50 seats, while the Liberal Movement and Freedom Party won 13 and 11 mandates respectively in the two rounds of elections held on 25 October 2020. Consequently, a conservative-liberal government will be leading Lithuania for the next four years under Prime Minster Ingrida Šimonytė. In fact, Šimonytė’s cabinet, the 18th since 1990, after being approved by President Gitanas Nausėda on 7 December, has become the most liberal and among the most gender-balanced cabinets in the world.

Russian- and Lithuanian-language media monitoring, conducted over a period of two months (September 1 – October 25), sought to identify outlets leaning towards “anti-systemic” sentiments and analyse toxic narratives spread by media that tend to carry pro-Kremlin sentiments. As Lithuanians went to ballots to choose who will rule the Parliament for the next four years, media contemplated who will deal with economic ramification caused by the COVID-19 pandemic and which party will be forming the majority government. Hence, four primary topics were chosen for further exploration – Conservative-Liberal victory, COVID-19 disinformation, anti-Conservative rhetoric and Astravyets. To filter only content relevant to the topics of research a set of keywords was identified and used. Data was collected using the International Republican Institute’s (IRI) media monitoring tool, >versus<. The report covers publications observed on both mainstream (e.g. DELFI, 15min.lt, lrytas.lt), national media outlets (e.g. LRT.lt) as well as those with more questionable standards (e.g. minfo.lt, sputniknews.lt, ekspertai.eu, bukimevieningi.lt). Over the two-month period 3188 articles were observed in Lithuanian-language media and 285 articles in Russian-language media. 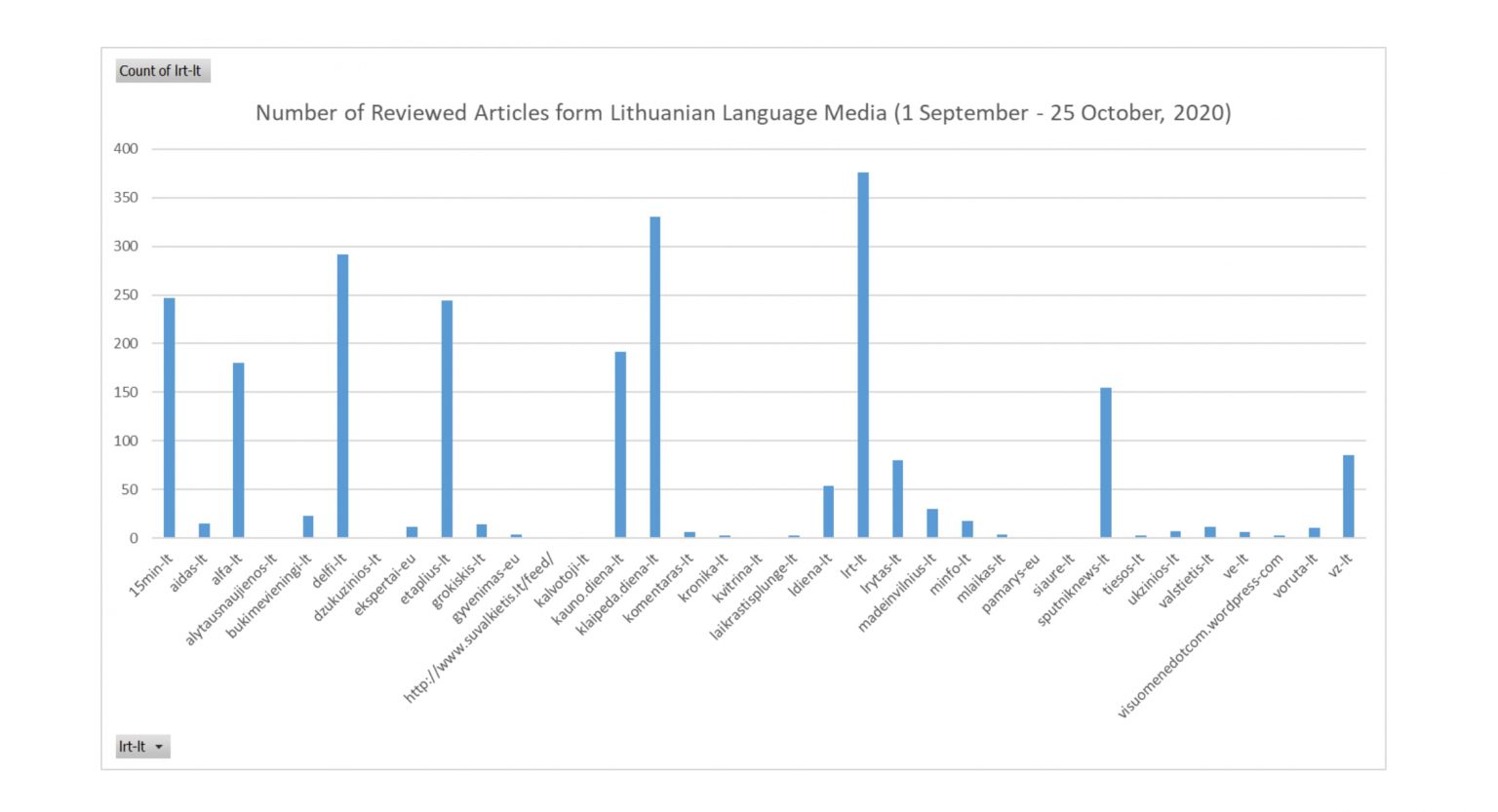 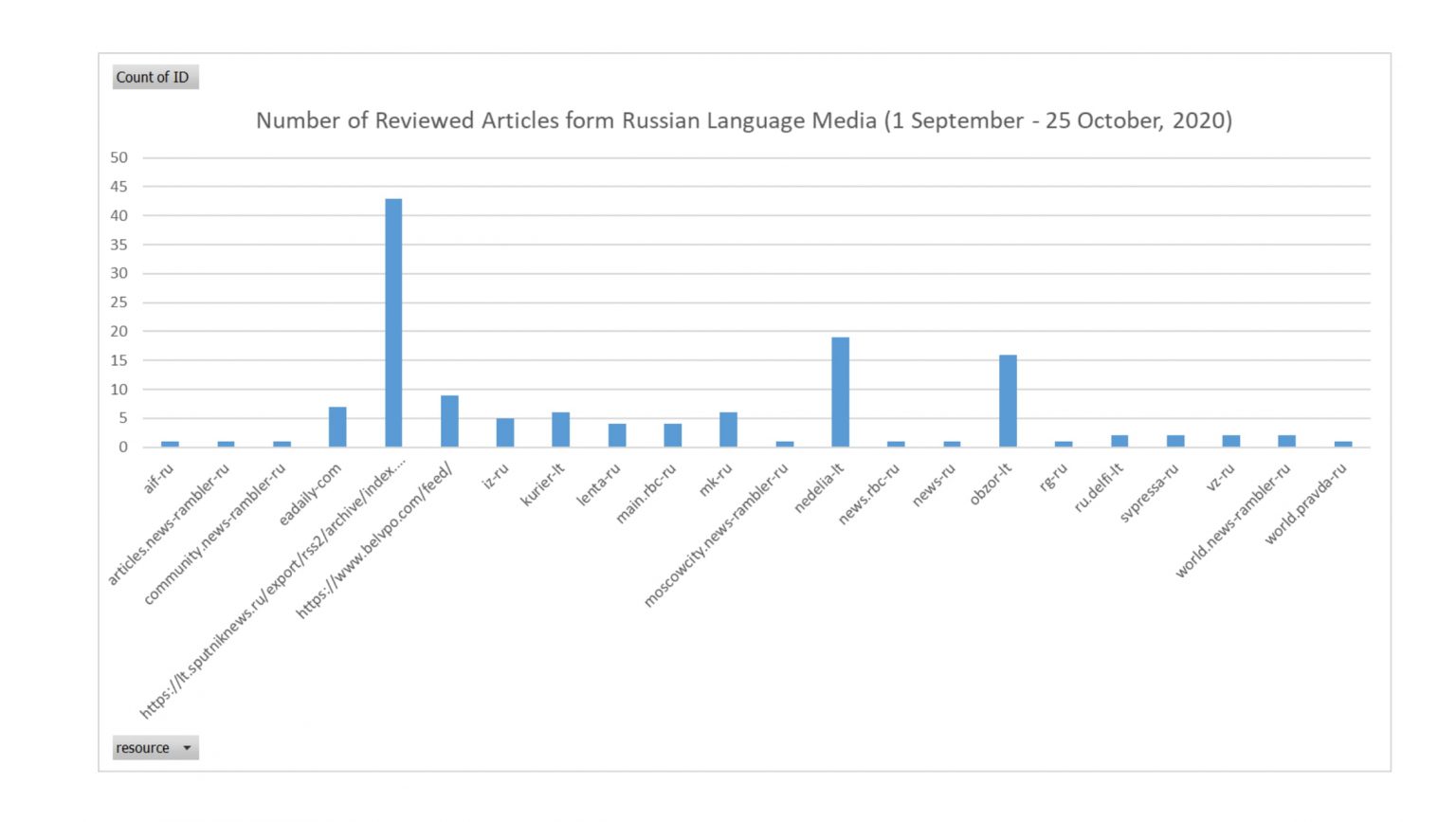 Pro-Kremlin media reacted negatively to the newly elected conservative-liberal government. It pushed narratives seeking to undermine public confidence in the new government, portraying it as serving external interests that were hostile to Lithuanian national interests and culture. Well-worn narratives related to LGBT issues and the “decency [decadence] of the Western world” were present. Both spuntiknews.lt and minfo.lt referred to the new government as a “rainbow project” implying linkages between the LGBT community and a supposed deep state. Phrases such as “the new government advocates for complete dissolution of Lithuania in the rotting swamp of the Western world,” “the new government’s sole purpose will be to promote Russophobia and kneel before the West” appeared, implying that Lithuania’s pro-European government is somewhat subversive. Readers were primed to believe that the new government will implement harsh budget cuts and will force people to accept “alien liberal values” using “tough measures.”

“Victory of the rainbow liberalism – why it happened and what does it mean?”

“Triumph of the Landsbergis’ clan. How will new partners help TS-LKD to come back into power?”

“Crisis is close: Victory of the Landsbergis’ clan might not last very long”

„Different yet the same kind of Landsbergism: Lithuanian voters are sold old ideas“

The anti-mask movement is just as active in Lithuania as in other European countries. While Lithuania managed to avoid mass protests against national lockdown and mandatory facemasks in public places, rallies of these so called “truth-tellers” can be observed in the virtual sphere. Although many associate conspiratorial behaviors with Reddit forums, this can also be observed on pro-Kremlin media platforms. In fact, fraudulent statements about the supposed health risks caused by facemasks appeared on sputniknews.lt and ekspertai.eu. Articles seek to trigger emotional responses in the audience by stoking fears about children’s health and wellbeing. Phrases such as “the masks that Veryga [former Minister of Health] is forcing […] our children to wear masks in schools that do not protect against the coronavirus disease, but themselves [masks] become hotbeds of the virus!” and “the vassals administering the territory of Lithuania harm the health of the country’s children” are used. Notable is the use of terms ‘vassals’, in reference to the Lithuanian government, dovetails with the aforementioned narrative that the government does not serve the interests of the Lithuanian people, instead implying that the people working within government structures answer to a more powerful (external) political entity.

„Worse than COVID-19: Lithuanian politician filmed an experiment about the mask danger”

Analysis shows that anti-vaccine rhetoric goes hand-in-hand with anti-mask rhetoric, fostering a different kind of reality based on fictional understanding. A reality that undermines data-based science and ridicules governments and health officials’ readiness to provide every citizen across the country with evidence-based medical care.

A push to prioritise one vaccine over the other can be observed as well. For instance, in a below-indicated article the vaccine developed by AstraZeneca is portrayed as unsafe and potentially lethal. In fact, Ugnius Kiguolis, a conspiracy theorist, already mentioned in our previous report, presents the company’s vaccine as lethal, while ekspertai.eu claims that Lithuania should stop working towards acquiring the vaccine from AstraZeneca and instead obtain a safe and effective Sputnik V, a Russian-made vaccine.

Media monitoring has shown that pro-Kremlin media outlets had been actively using anti-Conservative Party rhetoric (partially led by the current opposition Farmers and Greens Union) in order to repel voters and form an unfavourable view about party leaders. Behind such rhetoric could be explained by LVŽS’ desire to stay at the top of the power ladder and retain a majority in the Parliament for the next four years. Additionally, it seems likely that below-indicated articles were particularly targeting senior Russian-speaking individuals as subject matter of these articles seems to be focused around four main areas: benefits, financial crisis and age.

The Conservatives:
“will make sure to cut your pensions”
“will take away your right for the 13th pension”
“are mocking the Lithuanian society”
“are imitating democracy”

“When Conservatives take power, they will cut benefits”

The Conservatives:
“will cut benefits for seniors”
“will abolish benefits for children”
“will ruin traditional families by legalizing same-sex marriages”

“Conservatives can push Lithuania into a serious crisis, Karbauskis said”

Disinformation targeting party leader and newly appointed PM Ingrida Šimonytė can also be observed. For instance, ekspertai.eu published two articles spreading misleading claims intended to damage Ingrida Šimonytė‘s reputation. Two articles present the current prime minister as corrupt and easily influenced by third parties. Claims about supposed financial crimes committed by the Conservative party are also made but without presenting credible sources. The anti-Conservative rhetoric goes back to 2008-2009 when then a Conservative-led government made harsh tax reforms as an attempt to curb the ramifications of the financial crisis (the infamous reform is mostly known as the “night reform”.)

Pro-Kremlin media is known for its unconditional support for the Astravyets NPP project and has continued to employ a number of tactics to increase support for the Astravyets NPP among Lithuanian audiences while undermining Lithuania’s concerns about the safety of the project. The use of satire and derogatory name-calling remains a go-to tactic by who meant to ridicule opinions that do not align with a what desired narrative. For example, in an article published by bukimevieningi.lt, Astravyets NPP is once again named as the „Landsbergis‘ atomic bomb“. It should be noted that an identical naming has been observed previously and can be observed across several articles. However, such naming has only been observed on bukimevieningi.lt and has not been adapted by other pro-Kremlin news websites.

In an article published by sputniknews.lt the author cites Alexey Anpilogov, a nuclear power expert, who claims that Lithuania‘s attempts to stop Astavyets-made electricity from entering its grid via the Russian system is like watching Don Quixote fight with the windmills. The allegorical comparison implies that Lithuania is powerless to stop the unwanted electricity from Astravyets NPP from flowing into its grid. While the claim is partially true, it is important to note that once Lithuania and other Baltic states synchronize their grids with those of Western Europe in 2025 it will be impossible to import electricity  either from Belarus or Russia.

The main reason why positive framing of the Astravyets NPP project can be observed on certain media outlets is to convince the public that the Astravyets-made electricity is safe and that Lithuanian government’s refusal to buy it is based on political phobias rather than economic reasons. For instance, sputniknews.lt and ekspertai.eu cite Lukashenko’s statements and refers to the

“Lukashenko: with or without me you will realise that Astravyets NPP will secure our safety”

Belarusian NPP as “part of the country’s independence”. Additionally, words and phrases carrying a positive tone are used, such as: “a miracle”, “breakthrough”, “achievement” and “a security guarantor” and seek to create an image of a “safe and economically sustainable” nuclear power plant.

Despite the strong presence of anti-Conservative sentiments in Lithuania’s public sphere coming from both pro-Kremlin sources and the opposition LŽVS, the Šimonytė-led Conservative party managed to sway voters their way and secure 50 seats at the Parliament, thus forming a majority government. However, as the Conservative-Liberal government takes its first steps in the Parliament and first reforms a set into place, we expect a swift increase in consequential narratives meant to incite division in Lithuania’s public discourse, especially on topics such same-sex civil unions or legalisation of cannabis for medical reasons. Additionally, it is likely that such narratives will continue to be used as tools to undermine Šimonytė‘s Cabinet and present it as „West-controlled“ libertarians on a quest to undermine the traditional type of governance and a traditionalist way of life in Lithuania.