Hungarians are the largest ethnic minority in Romania: at the latest census (2011) they represented 6.1% of the total population of the country of 20.1 million. A new census is going on in 2022, but the proportion is likely to stay roughly the same since the demographic decline occurred uniformly in most ethnic communities; the total population of the country today is estimated at 19.1 million.

The territorial distribution of the Hungarian communities is rather unusual, in the sense that most of them are grouped in the center of the country, in the mountainous area in east Transylvania (see map below). They form the relative majority in two of Romania’s 41 counties: 82% in Harghita and 63% in Covasna. In these parts they tend to form more traditional, rural communities. The rest of the Hungarian population is spread across the broader area of Transylvania and present in big cities like Cluj (Kolosvar), Târgu Mureş (Marosvasarhely) or Oradea (Nagyvarad), where they have a history of urban life going back for centuries. The Hungarian minority is split today almost evenly between the Catholic and Calvinist churches, in contrast to the ethnic Romanians who are predominantly Greek-Orthodox.

Both the size of the Hungarian community and its territorial distribution have political significance. First, since they make up around 6% of the total population, it means they have a chance to be represented in Parliament proportionally, by a normal party which passes the electoral threshold of 5%, and not by making appeal to the system of ethnic quotas like the other minorities. 18 other ethnic minorities are present in the lower chamber of the Parliament, but they have only one seat each, being elected through a special system which practically lowers the threshold. By contrast, the Hungarian ethnic party (UDMR) has currently 29 MPs (20 in the Chamber and 9 in the Senate) out of a total of 465 MPs, which means 6.2% of the parliamentarians. This is slightly above the 5.9% of the vote they scored in the 2020 elections. Running in elections as a fully-fledged party gives UDMR political weight and negotiating power when coalitions are formed, which they tend to use skillfully. What is more, the territorial distribution of the community means that in the two counties mentioned they dominate the local elections and usually end up in control of the County Councils and most of the municipalities, including the capital cities. They are also a significant political force in three or four other counties and large cities of Transylvania, outside the area of highest concentration.

The most important priority for the Hungarian political elite is to preserve the single party representation and avoid internal competition between various political actors, which would fragment the vote and pull everybody below the electoral threshold of 5%. Over the past 30 years, after the fall of communism, UDMR indeed managed to remain the dominant Hungarian party and to prevent, through tortuous negotiations, the appearance of a significant political competitor within the community; potential adversaries or dissidents from the UDMR line were eventually brought into the fold or awarded places on common electoral lists, under different arrangements. The same happened in the elections for the European Parliament. In 1996 UDMR joined for the first time a ruling coalition and had ministers in a Romanian cabinet. Today, in 2022, they are also part of the ruling coalition and have four members in the cabinet: three ministers with portfolios (Environment, Regional Development, Sport) and a Deputy Prime Minister. In terms of policy, UDMR has always had the natural priority of defending the cultural rights and identity of the Hungarian community, which comes down to education in the mother tongue at all levels, and a loose form of local autonomy and territorial reorganization for the twoand-a-half counties in east Transylvania where they form the relative majority. However this later point became less salient over the years and instead the sectoral policies administered by the UDMR ministers became gradually more important for the UDMR leaders. The redistribution of funds for local investments is also of keen interest and closely monitored, as well as negotiating their (informal) share of appointments for party members in all agencies, public companies and regional and local institutions where Romanian parties usually place their clients.

UDMR has been a supporter of Romania’s EU integration and in general is a centrist and moderate actor, member of the European Popular party. There is however one exception to this rule: they have always opposed vehemently the anti-corruption drive encouraged by the Commission and other international partners of Romania.

Most legislation aimed to weaken or dismantle the special anti-corruption institutions created with EU support bears their signature, and this permanent fight against the EU-inspired agenda for the rule of law, the defining cleavage of Romanian politics in the last 20 years, brought them closer to the Social Democratic Party (PSD) with which they form a natural partnership, formally and informally. The usual explanation given for this fact is that the ethnic Hungarian political elite in Romania is not more corrupt than the rest, but they enjoy the advantage of having a captive electorate and so can afford to say or do explicitly what other parties cannot, out of fear of losing voters: create a regime of impunity vis-à-vis the judiciary. Romania allows multiple citizenships and as a result many ethnic Hungarians also claimed and received the Hungarian one, especially after 2010 when the Law on Citizenship was adopted in Budapest, which means they are entitled to vote in the April 3rd elections. Based on historical trends, it is expected that around 200,000 Hungarian voters who are residents of Romania would register for this round parliamentary elections, out of a total of almost 500,000 in all the communities outside Hungary; the precise numbers is given in the chart below. The registration can be done in person or online; for the countries which do not permit dual citizenship (Slovakia, Ukraine) the authorities in Budapest do not disclose precise place of residence of registered voters.

Hungarians from Romania can vote in person in three locations: the embassy in Bucharest and the consulates in Cluj and Târgu Mureş; otherwise most of the votes are send by post. The participation rate of those who registered for voting is in general high: an estimate dating from 2008 puts it at around 70%. While the citizens with permanent residence in Hungary vote for the first-pass-the-post constituencies and for the proportional list, those who live in the neighboring countries can vote only for the proportional list which sends 93 MPs into the Budapest parliament. The extreme complexity of the Hungarian electoral system makes it difficult to anticipate how many MPs can the diaspora communities from the chart above send into the parliament. The educated guess, based on the calculations from previous rounds of elections, is that overall the diaspora can determine the fate of 1-2 seats. It is to be seen to what extent even the biggest Hungarian community abroad, that in Romania, would be able to influence in practice the composition of the parliament.

An overwhelming majority of voters from Transylvania tend to support FIDESZ and Viktor Orban: a recent survey puts this figure at over 90% . True, the polling institute is one controlled by the leadership of UDMR, but the consensus is that the results are not very far from reality – or from the 96% obtained by FIDESZ across the whole Hungarian diaspora in the last elections. Only 62% of the respondents in the survey know who is Peter Marki Zay, the common candidate of the opposition and would-be prime minister if this opposition wins.

This high level of support is confirmed by our online monitoring in 2021 which found that:

Curiously, the flow of funds from Budapest appears to have stopped months before the April 3rd elections, starting from the second part of the last year: in 2020 about 130bn Ft (almost 400 mil Euro) were pumped through the Gabor Bethlen Foundation; in 2021 this level dropped to only 30bn Ft (85 mil Euro). This is easy to conclude when one observes the investments made in outdoor advertising, which is almost non-existent, and the unusually low key electoral campaign organized by Budapest. Unrelated, some of the most visible columnists and commentators from the Hungarian speaking media shifted from a typical pro-FIDESZ agenda to actively supporting the Russian line after the aggression against Ukraine, or at least echoing anti-Kiev conspiratorial narratives in order to create confusion. These latest trends, as well as their causes, are to be confirmed / explored in further reports.

As for the relationship between the Romanian ethnic party UDMR and the governments in Budapest, two periods can be distinguished with clarity: before 2011, under the leadership of its former president Marko Bela, UDMR was more neutral (or pluralist) in its dealings with Budapest, in the sense that it cultivated good relations with most parties across the spectrum. After 2011, under its current president Kelemen Hunor (also senator and deputy prime minister), UDMR has gradually lost its neutrality and leaned increasingly towards FIDESZ, for which it acted sometimes as an electoral agent. This imbalance was extreme in 2021, for instance, when for the first time in years the Hungarian opposition was not even invited to the traditional Tusvanyos summer university organized by UDMR annually in Transylvania, where Viktor Orban features regularly as keynote speaker . 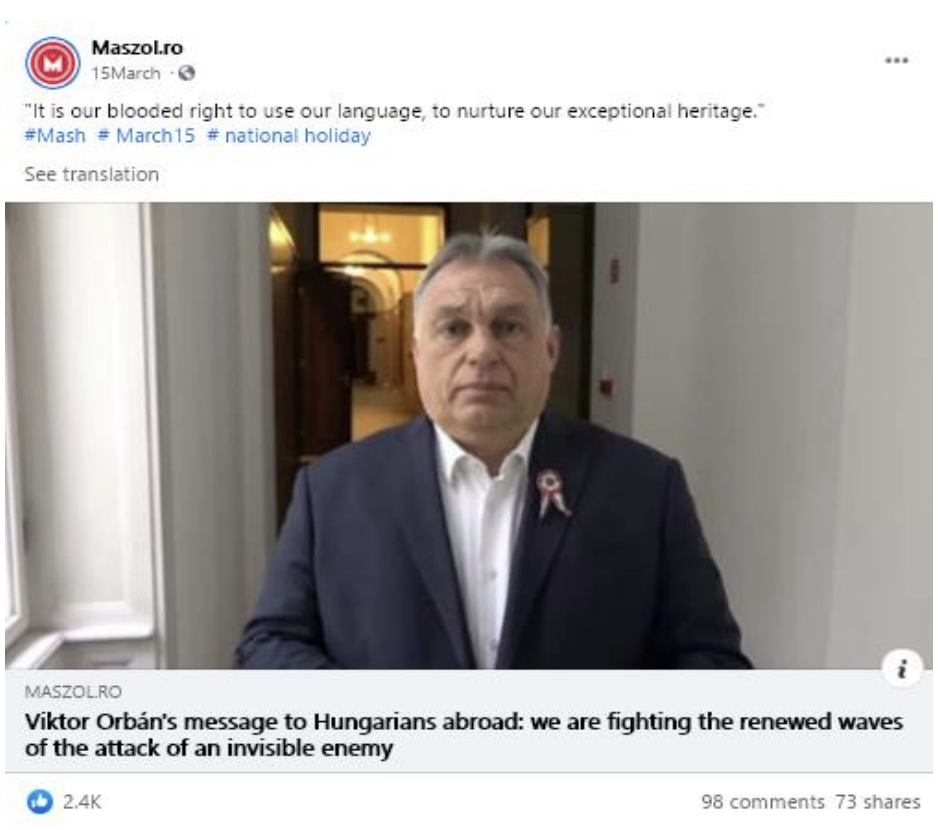 "Election Monitoring in Hungary and its Diaspora" research is conducted with the support of the International Republican Institute's Beacon Project. It is conducted in Hungary and select countries with a significant Hungarian diaspora: Romania, Serbia, Slovakia and Ukraine. The opinions expressed are solely those of the authors and do not reflect those of IRI.

The link to the original publication can be found: here.