Hungarians are the largest ethnic minority in Slovakia. According to the last year census, 422,065 Slovak citizens declared themselves to be of Hungarian ethic minority, a decline of 111,142 citizens since 1991. This constitutes 7,75% of the country’s 5.4 million population.[1]

The majority of Hungarian Slovaks live in southern parts of Slovakia, along the Hungarian border. These regions have been historically and colloquially called by Hungarians as “Felvidék”, literal translation being “upland” - the northern part of the Kingdom of Hungary, now mostly present-day Slovakia.[2]

Hundreds of years in the Austro-Hungarian empire, continued belief in the injustice wrought by the Trianon Treaty,[4] by which Hungary lost two-thirds of its territory as well as modern history often influenced by polarizing declarations of nationalistic public representatives on both sides, have led to diplomatic tensions.[5] Bilateral cooperation and relations especially worsened after the Hungarian government passed the 2010 Act on Hungarian Citizenship, granting Slovak Hungarians an opportunity to have Hungarian citizenship and later the right to vote in Hungarian elections. The Slovak government responded with a ban on dual citizenship, which was relaxed in March 2022.[6] However, bilateral relations between the countries significantly improved in 2010s with both parties declaring willingness of open and transparent cooperation.

The Hungarian government has been continuously building relations with the Hungarian minority living in Slovakia through various means including financial assistance distributed by various grants and foundations. One of the biggest “donors” has been the Gábor Bethlen Foundation (BGA). The Investigation Centre of Jan Kuciak (ICJK) uncovered that since 2011, a total of some 144 million euros have been distributed to Hungarian ethnic minorities living in Slovakia. Via such proxies and foundations, the Hungarian government has been funding cultural events, Hungarian language schools and kindergartens, Hungarian minority media, football clubs, the Reformed Christian church and businesses.[7]

2021 witnessed a sharper diplomatic exchange between the Slovak and Hungarian governments. In the summer of 2021, Minister Korčok reacted to the fact that high-ranking officials in Hungary were visiting Slovakia without officially notifying Slovak authorities, with a sharp message towards the Hungarian authorities stating “Slovakia is not Felvidék”.[8]  Furthermore, in 2021, the Hungarian government established a 400 EUR million fund, aiming to expand domestic agricultural companies abroad by buying arable land in neighboring countries. A number of political representatives, including the Slovak Minister of Foreign Affairs, Ivan Korčok, and Prime Minister Eduard Heger voiced their concerns and called upon their Hungarian counterparts to cease such activities.[9] In response to Hungary’s activities, Slovakia amended a relevant law stipulating that the Slovak Foreign Ministry must be notified in case of land being purchased by a foreign state, and that only active farmers are to be able to buy agricultural land.[10] Eventually the Orbán government backed away from the land acquisition plan after widespread criticism and dissolved the ‘Farmland Private Equity Fund’ (Termőföld Magántőkealap).[11]

While the plan for the farmland fund was dissolved, other activities of Hungarian government in Slovakia continue. An October 2021 investigation by the ICJK revealed that for years the Hungarian government has been buying old historical buildings in neighboring countries, including Slovakia or Romania, sometimes using the Foundation for the Preservation of Real Estate Heritage in Central Europe (Közép-európai Épített Örökség Megőrző Alapítvány).[12]

The influence of Hungary is also visible in the Slovak information landscape. In 2020, GLOBSEC mapped Facebook, using an AI tool developed by Graphika, in both countries finding that Hungarian-language sources are being consumed by Slovaks as well. 10% of Facebook public pages present in the Slovak space are also found in the Hungarian space, suggesting overlap between these two information spaces. These common sources of information included Facebook pages of Prime Minister Viktor Orbán, Fidesz and Jobbik.[13]

Furthermore, the insight into activities of Hungarian media outlets established in Slovakia and the Facebook outreach of political representatives of Hungarian ethnicity in Slovakia shows that Facebook pages of outlets like Körkép, Felvidék.ma or Ma7.sk, media outlets partially funded by Hungary, are in the top 5 Facebook pages with the most total interactions for the past two months.[14] In addition, the biggest reach when it comes to the number of videos viewed within past months include Slovak Hungarian politician from Hungarian Community Association - Hungarian Community Fellowship party, Orosz Örs, who is also an organizer of the largest Hungarian event in Slovakia, the Gombaszög Summer Camp.[15] According to CrowdTangle, in the past two months, his videos had over 760 thousand views. The Facebook page of the Slovak Hungarian Member of Parliament and the member of the government party Ordinary People and Independent Personalities, György Gyimesi, was the second most viewed with over 410 thousand views.

The post with the most total interactions within the Slovak Hungarian sources since the official launch of Hungarian electoral campaign, February 12, was a warning about environmental disaster on one Slovak river. The second [16] and the third [17] posts with highest total interactions were about Romanian politicians passing laws and policies further protecting the rights of Hungarian minority and commenting that Slovaks could “take notes” and follow the Romanian representatives’ footsteps. Not only the activities and declarations of Romanian representatives were disseminated within Slovak Hungarian minority by Hungarian outlets but were actively spread on Facebook via various Facebook groups reaching large parts of the Slovak Hungarian community. 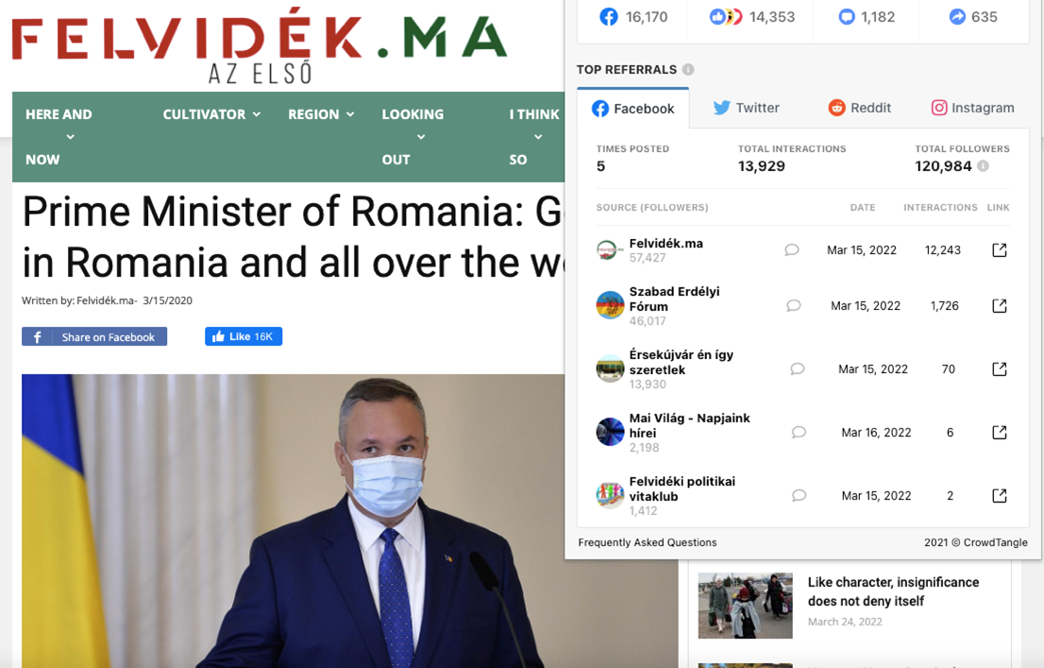 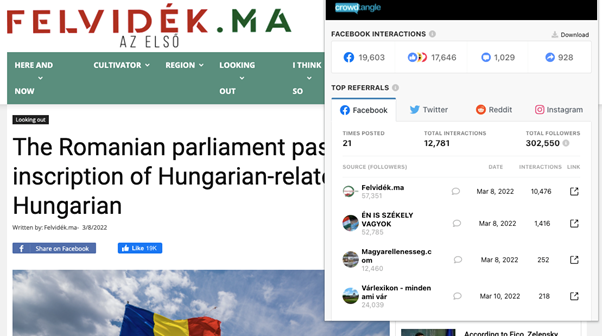 Among the top 20 posts with most total interactions was also a post of Felvidék.ma quoting former Slovak Prime Minister Fico calling President Zuzana Čaputová and Prime Minister Heger the mouthpieces of the US embassy in Bratislava. [19] Fico’s declarations were further spread by various Facebook pages and groups - A(z) 888.hu oldalt kedvelő ismerőseid (Your friends on 888.hu); Jobboldali összefogás határon innen és túl(Liberális mentes csoport) (Right-wing cooperation across borders and beyond (Liberal Free Group)); Magyarok a jó oldalon (Hungarians on the good side) and ELŐRE MENJÜNK NE HÁTRA ! (LET'S GO BACK NOT FORWARD!). 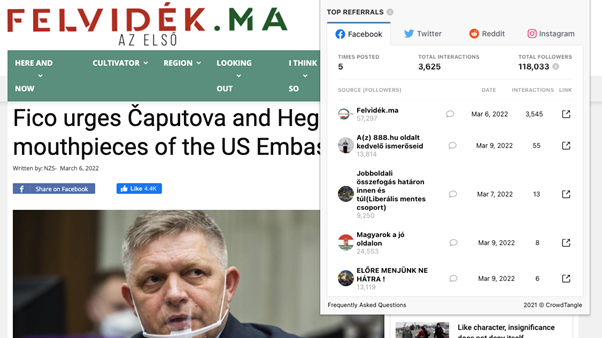 Another member of the Slovak Parliament that has a big outreach in the Hungarian ethnic minority and whose video was among the top 20 posts with most total interaction was György Gyimesi. In his video [20] titled “This is not what you promised us Madam President” the member of parliament accused President Zuzana Čaputová of neglecting the needs of minorities, in particular the biggest one, the Hungarian community, and neglecting her promises she had declared during her electoral campaign. Mr Gyimesi as a member of the ruling governmental party could lead policies supporting minorities and in this sense the accusation of Zuzana Čaputová of not doing enough for Hungarians and other minorities could be rather read as a strategy to win votes among Slovak Hungarians. His video was seen by various Facebook pages/groups including – (Czech) Děkujeme Maďarsku, děkujeme panu Orbánovi (Thank you Hungary, thank you Orbán!); Magyar Közösségért (For the Hungarian Community); Felvidéki közéleti vitafórum (Upland public discussion forum) or Felvidéki politikai vitaklub (Upland Political Debate Club) that further amplified the critical polarizing declarations towards the Slovak President. 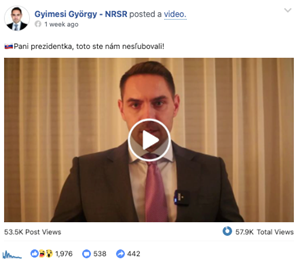 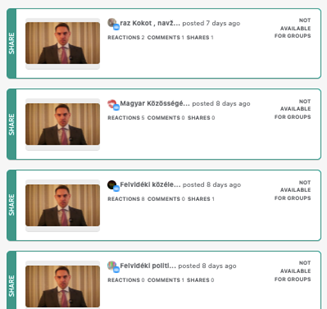 Hungary in the Slovak mainstream media The flow of information between Slovaks and Hungarians and the declarations of their representatives are very common, as it was possible to observe on previous examples. Analysis of occurrence of term “Hungary” among posts of Slovak mainstream media revealed that top 3 [21] news/stories with the most total interactions since February 12 were declarations of Hungarian representatives on the war in Ukraine. 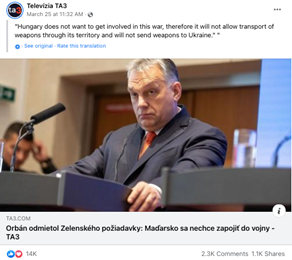 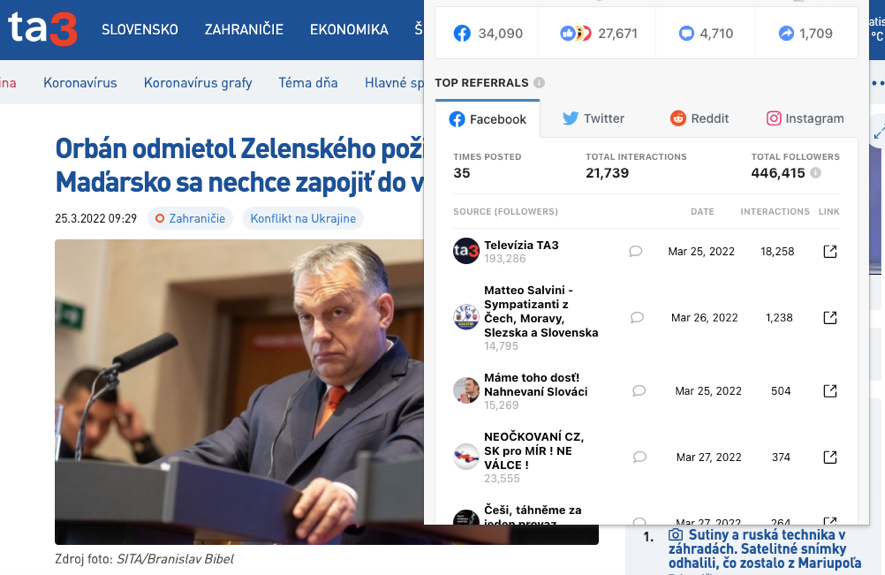 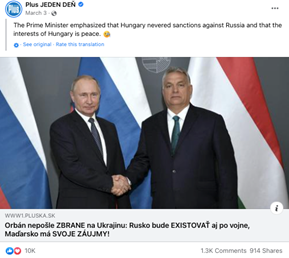 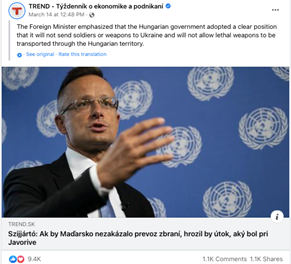 The post and article [22] with the first most interactions on Viktor Orbán refusing the call of Ukrainian President Zelensky for help and declaring that Hungary will not support the war was shared by 35 Facebook pages and groups - many of them from the Czech Republic, supporters of anti-system and Slovak far-right parties, and anti-EU and NATO pages. Please see example of Facebook pages that shared Viktor Orbán’s declarations according to CrowdTangle. 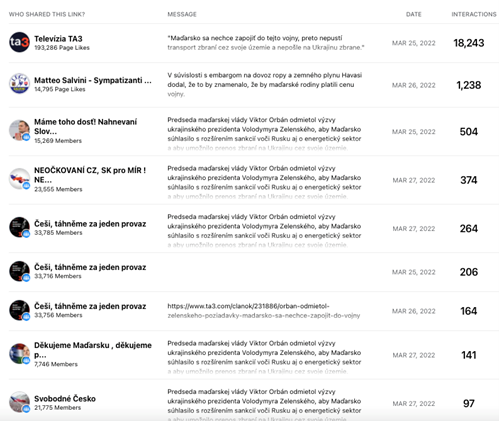 The analysis of Hungarian sources in the Slovak information space and the Slovak mainstream media since the official launch of Hungarian electoral campaign on February 12, 2022, shows a very intense flow of information between both countries and Hungarian ethnic minority. Declarations of various public representatives are not only being spread among followers in their respective countries, but issues and rights of Hungarian minorities from wider region are actively debated. Information originating in Romania is actively spread in the Slovak Hungarian info space. Similarly, declarations of Hungarian politicians are further spread not only in Slovakia but also in the Czech Republic. These interconnections of information ecosystems enable very effective spread of both political messages, propaganda as well as disinformation. Methodology This analysis focused on Hungarian media, online portals, open Facebook groups in Slovakia as well as Slovak Hungarian politicians within from February 12, 2022, when the campaign for parliamentary elections in Hungary was officially launched. Please see the list of the sources below: