As a part of the IRI's Beacon project initiative, EUROPEUM Institute for European Policy monitored Facebook posts from  Czech and Slovak political parties and their main representatives (full list below) The monitoring focused on the posts connected to the European Green Deal (GD) published between October 2021 and August 2022. An online tool, Pulsar, was used for the data collection and filtering of the results. The posts were then manually hand-coded based on the presence of pre-defined narratives, and the results were further analyzed. The goal of this research was to answer the following questions:

The initial filtering of the results (keywords listed below in appendix 2) showed 285 posts published by Czech and no posts published by Slovak parties and representatives. For this reason, search criteria for the Slovak posts were expanded, and 20 posts that mentioned issues related to the GD during the period of monitoring were also analyzed. After identifying whether the post is in general supportive, neutral or opposing of the GD, the main narratives concerning the GD were distinguished. These narratives were divided into three main categories: economy, politics, and environment. Economy-related narratives included messages such as "GD is causing high energy bills", "GD is causing unemployment", "GD will cost too much money", "GD will cause increased energy poverty", and "GD is an economic opportunity". Politics-related narratives included statements "GD will improve/worsen our energy security", "GD will be used to control the member states", or "GD will be used to control citizens". The last group of narratives was related to the environmental benefits of the GD.

Regarding the Czech language posts, all parties from the government had at least one post which mentioned the European Green Deal (the political compass of the parties can be found below in appendix 3). Within the posts, the economic narratives (which were mostly opposing GD) were dominant (172) and represented 60% of total Czech posts. Posts that contained political narratives represented 13% (36) of the total number, while environmental narratives were found only in 2 posts. The remaining posts were only mentioning the GD, without more information that could be used for filtering.

The profile that mentioned the European Green Deal most times and stood out in the number of posts related to the GD during the whole monitoring period is the account of Tomio Okamura, leader of the far-right populist party Freedom and Direct Democracy (SPD). His posts represented 72% of all found Czech posts (204). Moreover, among all monitored parties, his political party similarly shared the highest number of posts related to the GD, representing an additional 14% of the posts (39). These high percentages included posts that were word-to-word copies of Okamura's interviews for other media portals, as well as posts that were mostly related to other political issues and only repeated the same phrases connected to the Green Deal at the end of the posts. The most common narratives found in Okamura's posts were economy-related, citing GD as the cause of the increase in energy prices. In addition, GD was also opposed on purely ideological grounds without providing reasoning or due to baseless proclamations about its 'high costs'. Not only were the posts related to GD from Okamura the most common across the political parties, but they were also reaching the highest levels of engagement. This is especially worrying, as some of the posts were going as far. 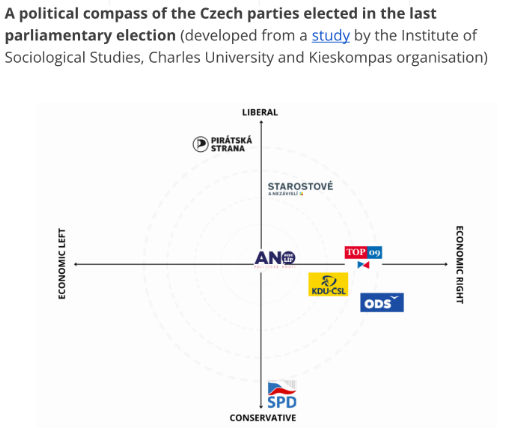 As denying climate change and claiming that an increase in temperatures is a natural occurrence, the representative with the second highest number of posts related to GD is Andrej Babiš, leader of the Action of Dissatisfied Citizens (ANO) party, as his posts represent 2% of the total number (6). The narratives spread about the GD by his profile are more varied than in Okamura's case, as some can be seen as neither supporting nor opposing the GD. Babiš's posts are carefully written. Although a negative stance can sometimes be identified, most posts were tagged as neutral, highlighting both the dangers and opportunities of the European Green Deal. In some posts, however, Babiš used stronger words, calling the GD 'crazy' and calling for a change in the approach. Babiš's political party, ANO, shared five posts during the monitoring period, often copying Babiš's statements. Although Marián Jurečka's profile only shared three posts related to the GD, his party's profile KDU-ČSL (Christian and Democratic Union – Czechoslovak People's Party) shared 9, mostly with a neutral stance towards the GD, with three supportive posts. Civic Democratic Party (ODS) (2+4), TOP 09 (3+1), and Mayors and Independents (STAN), (2, none from Vít Rakušan) parties and their leaders show a similarly low number of results in regards to their posts on GD, and the majority of these posts have a neutral stance towards GD (also includes only mentioning them in posts). Interestingly, there are only four posts related to the GD from the leader of ODS and the current prime minister of the Czech Republic, Petr Fiala, all with neutral narratives to the GD. The only party that had a supportive narrative for the GD, highlighting its possible economic contributions, was Pirates, but only in one post. Its leader, Ivan Bartoš, mentioned GD in four posts while explaining that GD can also bring economic opportunities to three of them.

As previously mentioned, the GD search did not bring any results from the Slovak governing parties and their leaders. Only four party accounts with their representatives generated results. Ordinary people and Independent Personalities (Oľano), For the People (Za ľudí), Freedom and Solidarity (SaS), Direction Slovak Social Democracy (Smer). Among these, the most posts were published by the party For the People and its leader Veronika Remišová (4+4). The posts were, however, only reshared between these profiles. All posts were very varied in their content, including topics such as the transformation of the coal regions from the Just Transition Fund, energy security improved by renewable energy, and access to clean water Total of seven posts were found by Richard Sulík and his party SaS (4+3), again, covering a wide range of issues, such as updates on the party's green accomplishments, changes in legislation for easier connection of renewable energy to the grid, explanations of sanctions' impact on companies or promoting state's green initiatives, such as Zelená domácnostiam. The remaining parties, Oľano and Smer, shared only one post on their parties' profiles, related to the accomplishments connected to the use of renewable energy and warning about the risks of cutting off from Russian oil and gas, respectively. 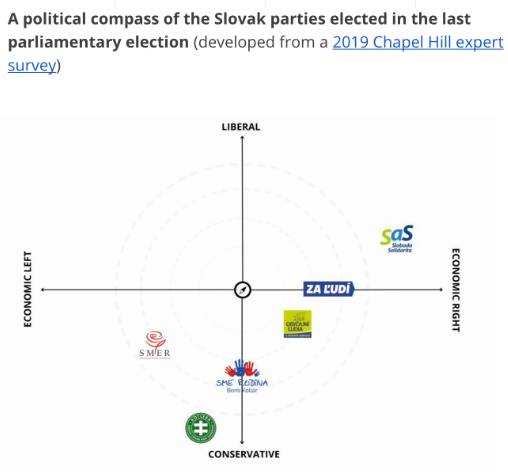 During the monitoring period, many international developments were expected to have an impact on the content and quantity of the posts. Indeed, in March and April 2022, the months following the Russian invasion of Ukraine, Czech posts that mentioned energy security and the ending of the fossil fuel dependency on Russia increased in numbers. However, although these topics were more frequent in the posts, they did not make connections to the Green Deal. Instead, in the Czech case, the posts during this period were often criticizing the new government for lack of action concerning an increase in energy prices. Some posts were calling for increased use of renewable energy as a way to end the fossil fuel dependency, but again, there were no connections made to the Green Deal. Similarly, June saw an increase in posts related to energy security and energy prices, as these topics were found important for the government to deal with during the Czech Presidency of the Council of the European Union. During this month, most Czech parties mentioned energy politics, but again, parties were not connecting energy-related issues to the Green Deal. In Slovak posts, an increase in the numbers of posts related to energy was not as evident during the same months as in Czech posts as they were, in general, lower in numbers throughout the whole monitoring period.

The monitoring of the posts related to the GD from Czech political parties shows that the European Green Deal is predominantly mentioned negatively and that other parties lack the effort to fill their online space with positive messaging, highlighting the possible positive impacts of this initiative. In addition, except for one post by Ivan Bartoš, the Czech parties currently in the government or their leaders were not seen advocating the positive environmental impacts of the GD on Facebook during the monitoring period. In regards to Slovak parties and their representatives, GD is not discussed in their posts at all. Even in the posts that mention issues related to it directly, such as climate change, energy security, and the environment, there is no connection made between these topics and the European Green Deal in the posts. Because of the lack of results from many currently governing parties, the questions outlined at the beginning of this blog cannot be fully answered. Instead, a more fundamental problem of the lack of attention paid to the Green Deal by the parliamentary parties in both the Czech Republic (except SPD) and Slovakia has been identified. Such an approach from the currently ruling parties also creates a difficulty for the democratic legitimacy of the Green Deal as the citizens are detached from its development by receiving only partial or no information. Thus, a successful green transformation has to face yet another challenge in the Czech and Slovak contexts.

This article has been prepared with support from IRI's Beacon Project. The opinions expressed are solely those of the author and do not reflect those of IRI.