The EU and Green Deal as a Scapegoat for Energy Woes

Infosecurity.sk, in cooperation with the International Republican Institute’s Beacon Project, monitored posts concerning the European Green Deal present in the Slovak-language Facebook space between the beginning of July and the end of September, using the CrowdTangle tool. In particular, we reviewed the Facebook content of actors that have been listed as pro-Russian sources by Gerulata Technologies, a Slovak technology company that develops digital tools for monitoring and evaluating harmful online content. This monitoring is a part of a larger IRI initiative implemented simultaneously in five EU countries.

Some top Slovak politicians are prominent propagators of the narrative that sanctions do not harm Russia and, in fact, backfire, only harming those countries that impose them. For example, former Prime Minister Robert Fico, leader of the Smer-SD party, has argued that sanctions do not work. He has criticized EU member states’ commitment to reduce their gas consumption by 15% this winter, a decision that he says will have disastrous consequences. Fico chides the EU for not seeking to end the war in Ukraine and for having no plan for dealing with the energy crisis, which is, after all, a consequence of its policies, he says. Fico’s claims were further amplified by several non-mainstream media and pro-Russian Facebook pages (Extra plus, Hlavný denník, Som z dediny, Sila pravdy).

Several Facebook posts also featured the narrative that the sanctions imposed on Russia are directly to blame for the energy crisis and high energy prices. Parliamentary deputy Slavěna Vorobelová, who represents the far-right People’s Party Our Slovakia (Kotlebovci/ĽSNS) and has long shared pro-Russian views, wrote: „We have nothing to do with the war in Ukraine, so why do we have to suffer for pointless sanctions and why can’t we choose the cheapest, most stable, and safest gas alternative that we have and we all know that it is gas through a pipeline from Russia?“ Vorobelová has around 19.000 followers on Facebook.

Some sources (Slobodný vysielač, Hlavný denník, Sila pravdy and Som z dediny) also emphasized that the decision to save energy has created conflict within the European Union and tried to give the impression that member states are revolting against the move.

Pro-Russian pages often uncritically and purposely disseminate Russian President Vladimir Putin’s statements. In one speech, Putin warned that further sanctions against Russia would bring a catastrophic rise in energy prices for European households and that anti-Russian sanctions were causing far more damage to the countries imposing them than to Russia itself. Marian Kotleba and Marián Mišún of the ĽSNS party spread Putin’s claim, as did the napalete.sk site and the Facebook page Zdrojj. These four posts had a total of 1,214 interactions.

Posts of Marian Kotleba and Marián Mišún on 8 July 2022. The article’s title says: “Further sanctions against Russia will cause a disaster for European households, Putin warns.”

Some sources also argued that sanctions on Russia cause not only an energy crisis but also a food shortage. The Russian Embassy in Slovakia accused the West of „usurping“ commodity and food flows for itself, worsening the situation in developing countries that depend on food imports. Spravodajská alternatíva went even further and described the sanctions on Russia as irrational, adopted without thought – as demonstrated by the food crisis, for which the EU and its sanctions are allegedly co-responsible.

There have also been occasions where sources normally antagonistic toward the mainstream media – claiming they hide the “real” truth – have shared content from mainstream media when they believe it is supportive of their anti-Green Deal narratives. One prime example during the monitoring period was an interview with Stanislav Pánis, an analyst at the Slovak branch of the Czech J&T Bank, who appeared on the TA3 television station, talking about the energy crisis.

In Pánis’ opinion, the West has the ability to destroy itself in the areas of energy and the economy and does not need an external threat like Russia. „The high energy prices are due to the illogical, rushed energy policy of the West over the last X years, green ideology, the effort to defend climate [change], and in the case of the European Union, one could say, even green sectarianism, which does not look at any rational economic calculation, does not look at scientific and technological progress, just has blinders on and goes to save the planet with fossil-free green sources.“

The disinformation site Slobodný vysielač shared the interview on Facebook. In its introduction to the video, the post sarcastically claimed TA3 was spreading hoaxes because every decent citizen knows that the energy crisis is not caused by anti-Russian sanctions but is all Putin’s fault. AntiKiska, Zdrojj, as well as Hrot.info and napalete.sk, sites known for disinformation content, shared the interview, emphasizing Pánis‘ assertion that the EU’s „green ideology“ is to blame for the energy crisis. These posts had a combined total of 2,125 interactions (reactions, comments, shares) on Facebook. 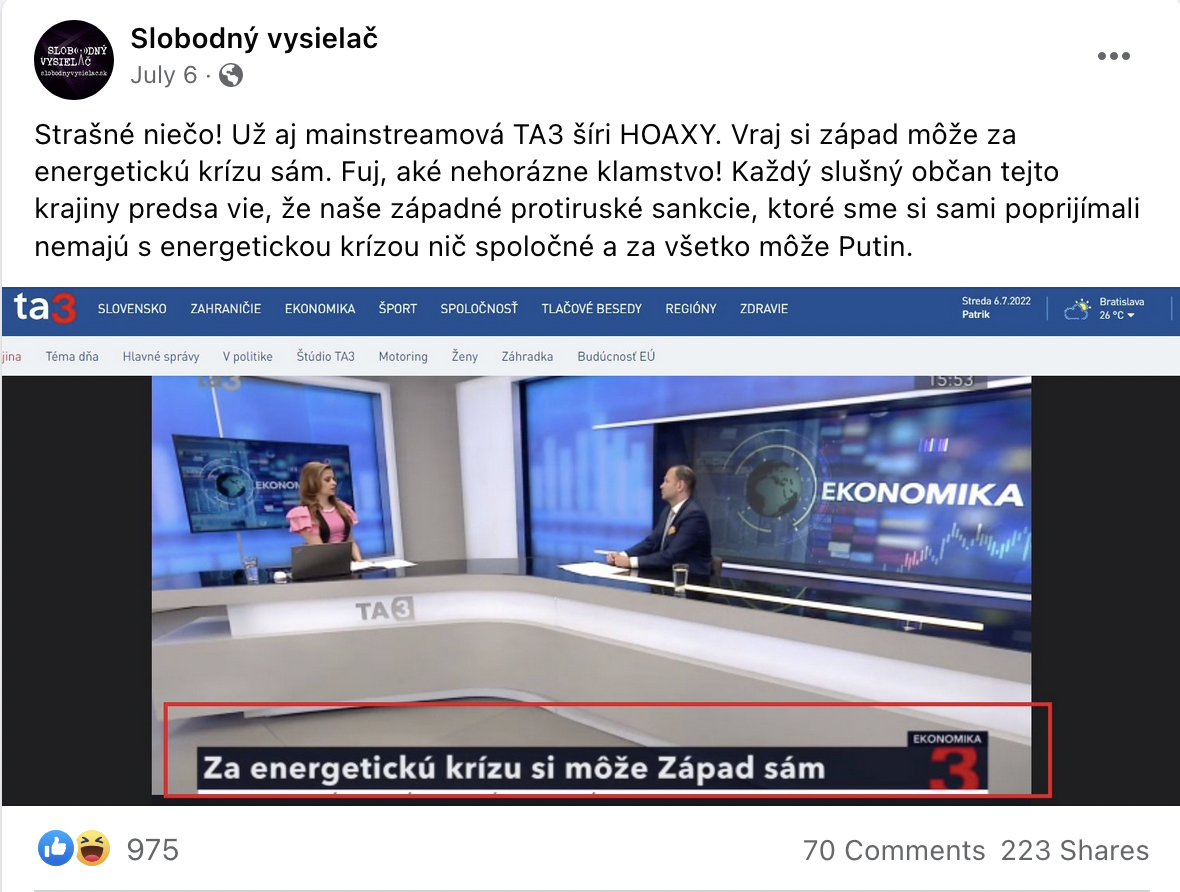 Post of Slobodný vysielač on 6 July 2022. The translation is as follows: “Something awful! Even the mainstream TA3 is already spreading HOAXES. They say the West is to blame for the energy crisis. Ugh, what a blatant lie! After all, every decent citizen of this country knows that our Western anti-Russian sanctions, which we have taken upon ourselves, have nothing to do with the energy crisis and that Putin is to blame for everything.”

The Russian Embassy in Slovakia also spread the narrative that the West’s green agenda is responsible for the energy crisis. Its Facebook page reported on Putin’s statement that the West had decided to bet on alternative energy, but that „the possibilities of green sources have collapsed due to the cold winter and windless weather.“

The extremist party Republika and its leader Milan Uhrík, a member  of the European Parliament, are also consistently critical of the European Union. In one post on his Facebook account, which approximately 151,000 people follow, Uhrík claimed that U.S. policy has led Slovakia to cut off Russian gas/oil and, because of the “eco-youth,” the country is shutting down gas/coal and nuclear power plants. „The current energy collapse and brutal price increases are the results of ONLY and ONLY bad political decisions by the West,“ he argued. In another post, Uhrík again stated that the energy crisis is only the fault of the West, which has lost its common sense and diplomacy. 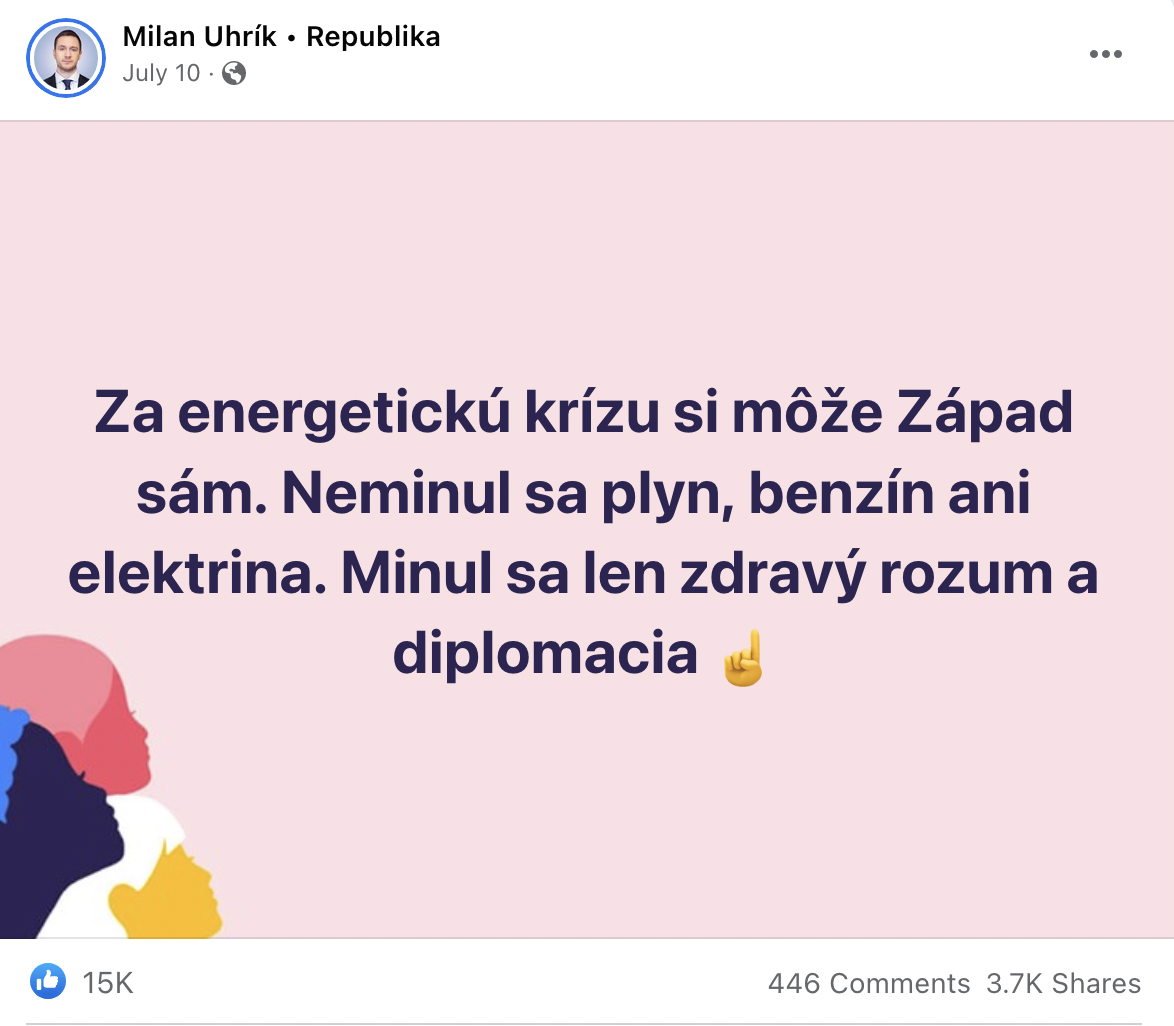 The Facebook status of Milan Uhrík on 10 July 2022. The translation is as follows: “The energy crisis is the West’s own fault. Neither gas, petrol, nor electricity is running short. Only common sense and diplomacy are absent.”

Critics have also attacked the West with the narrative that Russia is actually a reliable partner and that Gazprom, the Russian state gas company, has been fulfilling its commitments. The Russian Embassy in Slovakia said that other interpretations are the West’s attempt to shift the blame for its own mistakes onto Russia. In the same way, pro-Russian actors have tried to give the impression that Putin finds the West’s actions simply amusing since they don’t harm Russia (Extra plus, Zdrojj, Veci Verejné).

Smaller pro-Russian Facebook pages have also reacted to the EU’s moves toward diversification of natural gas sources, saying that these new strategies are not enough and Europe will not get through the winter without Russian gas (Hlavný denník, Sila pravdy, Som z dediny). These sources, for example, published reactions to the signing of an agreement between the EU and Azerbaijan to double gas supplies to Europe. „Just don’t let it be Putin,” the pro-Russian Facebook page, Armáda Ruskej Federácie, sarcastically commented. “We turned a blind eye to Nagorno-Karabakh [site of a bitter war between Azerbaijan and Armenia], to the fact that it [Azerbaijan] is a former USSR country. The main thing is that it has cold relations with Moscow, and that’s why they will be our buddies.“ Marián Ďuriš of the Republika party, on the other hand, argued that Azerbaijan does not act autonomously and is, in fact, controlled by Russia, while mainstream analysts are allegedly trying to tendentiously create a narrative that there are disagreements between Russia and its neighborhood.

All of the above-mentioned narratives may eventually increase support of Russia among the Slovak public – already vulnerable to Russian influence and tending to not only believe but also share and spread the Kremlin’s false claims about the West and the EU. The likely goal of the monitored pro-Russian actors is to decrease both the support and solidarity of the Slovak population for Ukraine. Simultaneously, narratives related to the energy crisis are being used to delegitimize the EU as well as to further downplay the importance of its green and climate policies.

This article has been prepared with support from IRI’s Beacon Project. The opinions expressed are solely those of the author and do not reflect those of IRI.