Towards a model measuring the impact of disinformation on electoral behaviour

The text was prepared in cooperation with Nikola Hořejš and Sarah Komasová (STEM).

One of the important topics of debate about disinformation is its impact on democratic processes – elections in particular. It is even possible to claim that the surprising results of the US presidential elections in 2016, often explained to be a result of foreign interference, contributed to the emergence and rapid development of this field of study. While disinformation can obscure the democratic debate and discredit election results, measuring their impact on the voter's behaviour is not easy. Since human decisions are derived through a near countless number of datapoints, the task of assessing the influence of any specific input on ones voting behaviour is extremely difficult.  Together with experts from the sociological research agency STEM we tried to tackle this challenge during the Czech Parliamentary elections 2021. Our aim was not only to map the information space but also, to combine our findings with sociological data to determine the percentage of Czechs that believe false headlines, their characteristics and attempt to assess whatever the falsehoods had an impact on voting.

Before we step further to the presentation of our findings, one terminological remark is in order. As the motivation of spreaders of tested falsehoods was not the focus of this study, we did not assess the possible intent of the authors and, therefore, did not make a judgement on whether the content should be classified as ‘disinformation’. As a result, the word misinformation is used. which is understood as falsehoods spread without malicious intent (often as the result of a mistake or due to the lack of knowledge).

How to design a useful model?

Before we could start drawing conclusions, it was essential to create a model allowing us to measure the opinion of the population. This is not a trivial task since a significant portion – around 40 % – of Czechs purposefully avoid media reporting on ongoing events nor do they have substantive engagement with politics making their political beliefs unstable and self-reported exposure to tested falsehoods dubious. To illustrate this point, it is possible to refer to our findings about the respondent’s awareness of the Pandora Papers. The investigative reporting had direct relevance to the Czech elections as it uncovered that the former Prime Minister and leader of the ANO party, Andrej Babiš, was involved in a scheme to use off-shore shell companies to avoid taxes. This information was made public one week before the elections and was widely circulated in the Czech information space. Given the intensity of the debate about this matter, it is quite striking that 31% of our respondents stated that they were not aware of the incident and hence do not have any opinion on the reliability of this information.

Therefore, we decided to construct a model which measured the ability of respondents to distinguish between real news – factually correct statements related to political parties running in the elections – and misinformation – falsehoods about political parties circulating in the information space usually with negative spin. To make our model even more precise we added a selection of fabricated news – a set of statements which we invented. As visible from the chart below, our measurement showed that 28% of respondents did not believe in any of the real news presented to them. This suggests there might be a significant portion of Czech society that distrusts everything they read. On the contrary, misinformation resonated among 25% of the population who believed at least 2 out of 4 false statements presented to them. 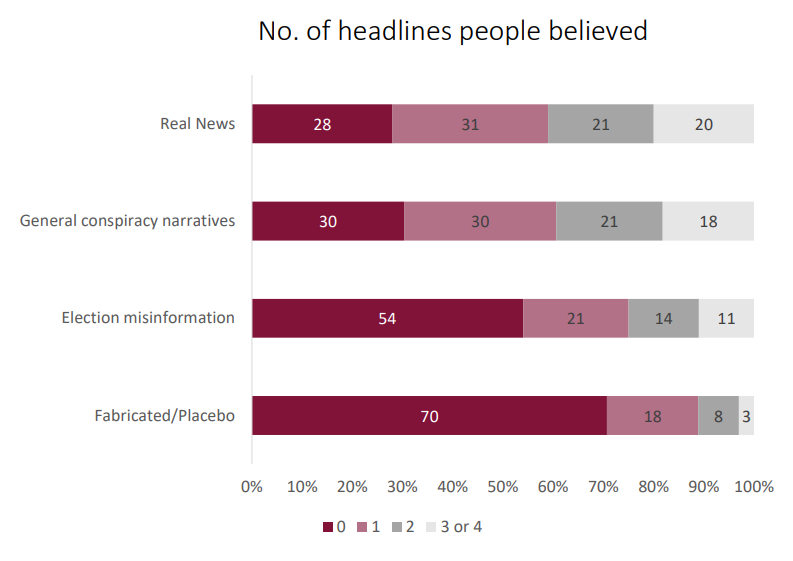 The main aim of our model was to divide the respondents into four different groups based on their ability to distinguish the reliability of presented statements. Our assumption was the lower ability to distinguish between presented statements (respondents in Group 1 in further charts) represents a lower ability to orient its-self in the information environment and limited comprehension of political developments. Hence, we determined this group to be the most vulnerable to misinformation.

Once the vulnerable group was established, we were able to examine its characteristics. Our findings showed that this group is not so different from the general population – the economic background, level of education, age or gender did not sufficiently explain the vulnerability to misinformation. One aspect that did appear to explain the group, however, was their general distrust of democratic norms. These people felt personally unappreciated and perceived Czech democracy as significantly flawed and unjust. According to their evaluation, the outlook was grim, and they did not expect anything good from the future. These feelings of alienation and insecurity made respondents less interested in truth and more prone to endorsement of general conspiracy theories. While we still have limited knowledge about the reasons for this position, we argue that any response must attempt to treat the problem beyond the information space, such as training on fact-checking or media literacy, and instead include civic education and other means of socio-political engagement in order to restore trust in the state and other social institutions. 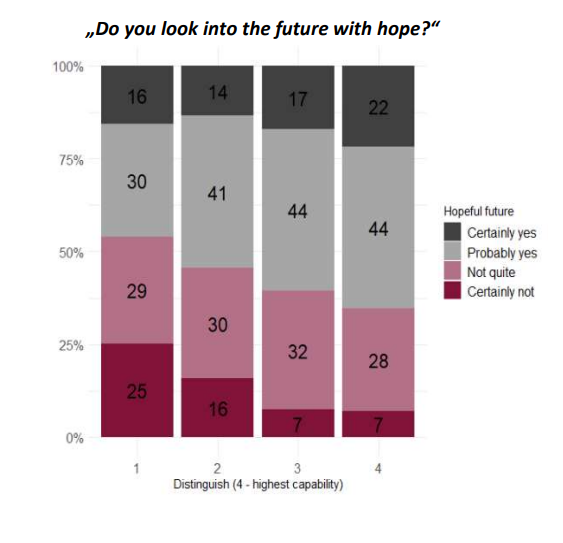 This is especially important since these people are not completely disengaged from the political process – for instance, the percentage of voters among them did not differ significantly from other groups. However, when they did vote, they were more likely to do so for far-right and other populist parties. Therefore, it is less likely that exposure to falsehoods is persuading their voting behaviour, but rather their willingness to believe falsehoods is a symptom of a wider anti-systemic perspective.  This presents a challenge in that these voters are not likely to be swayed by the information they are exposed to in the leadup to the election, as they were generally already decided on who they would support, and instead much more work needs to be done in the medium to long term to establish their trust in democratic society. 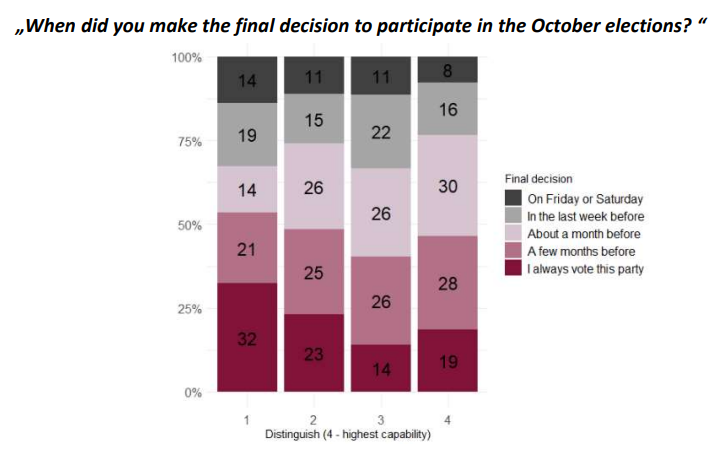 Since exposure to misinformation did not seem to play an important role in the voting decision, even for the most vulnerable group, we had to reassess their role in the decision-making process. We ceased viewing misinformation as a cause of voting behaviour, and instead understand it as a consequence. In other words, the acceptance of false statements is just another way how to reinforce an already formulated position. Here we found a notable correlation between the feeling of disappointment from the specific political party and willingness to believe in any critical statements – no matter their validity. This means that, in fact, everyone can be susceptible to misinformation depending on the topic and context. This should motivate us to embrace intellectual humility.

However, even in this context, misinformation does not seem to have a significant influence on voting behaviour aside from reinforcing already existing antagonism against a specific party which might lead to more resolute support of its competitor. On the other hand, we did not find a significantly higher number of people believing in misinformation among voters considering multiple parties. Hence some of them indeed could make their decision based on misinformation, but it does not seem to be the only determining factor. Obviously, our research was focused on a short and specific time period of intensive electoral campaign and, therefore, we were not able to properly capture possible impacts of long-term beliefs and their relation with recurring falsehoods. This topic remains open to other – more robust – research that should be able to take into account a broader variety of variables, ranging from the psychological profile of the individual to social-economic context. However, we believe that our findings can be useful for setting such studies since it demonstrates that belief in misinformation must be treated in relation to other factors influencing voting behaviour and perceived not only as a cause but also as a possible consequence.

We believe that our research did not only bring new insights into the role of misinformation in Czech politics but can be useful starting point for developing the model for analysing other elections – including European elections in 2024. The bottom-line being that there is a need for such a model since relying on self-reported beliefs is too simplified and does not necessary correspond with voting behaviour. Therefore, future research on influence in elections should not place undue emphasis on disinformation or misinformation being the cause of anti-democratic influence, but instead should treat their popularity as a consequence of the pre-existing dispositions of some voters. Such an approach will allow us to better identify vulnerabilities – on personal and societal level – which we will them be able to address more accurately.