Hungarian 2022 elections and the Hungarian national minority in Serbia

Serbia is an important country for Hungarian national elections. This is due to a significant number of Hungarian citizens living in Serbia and the strong links between Fidesz and the dominant Hungarian national minority party in Serbia (VMSZ), as well as the dominant national party in Serbia. While only about a third of the total Hungarian population in Serbia has registered to vote in the upcoming Hungarian election, indicators suggest that these voters are disciplined supporters of both Fidesz and VMSZ and that their opinions are shaped by media sources biased in favour of Fidesz and its messages.

Ethnic Hungarians living outside the country had a facilitated path to Hungarian citizenship following the introduction of the 2010 Act on Hungarian Citizenship. Since the only needed to demonstrate the ability to speak Hungarian and provide evidence of Hungarian ancestry many non-Hungarians in Serbia managed to acquire citizenship as well by managing to prove that one of their ancestors lived within pre-Trianon Hungarian borders. By 2019, more than 1.1 million applications had been filed and over 950,000 citizenships granted.

While only citizens residing in Hungary are entitled to a vote those living outside the country can vote for party lists according to which the remaining 93 seats are distributed. Votes from abroad have so far been mainly won by the ruling Fidesz party; in the 2018 parliamentary election, Fidesz received 96.24% of the diaspora vote or 216,516 votes.

According to the 2011 population census in Serbia, there were 253,899 citizens identifying as ethnic Hungarians, making up 3,53% of the overall population and the largest ethnic minority in Serbia. The next census is scheduled for October 2022 and it is expected that the number of Hungarians, as well as the overall population of Serbia, will be lower. In the 2018 elections for the National Minority Council, there were 129,471 eligible Hungarian voters on the special electoral roll.

The Hungarian population in Serbia lives almost exclusively in the Autonomous Province of Vojvodina (APV), which borders Hungary. The Law on Protection of Rights and Freedoms of the National Minorities (in force since 2009) regulates such issues as the official use of minority languages in education and the work of public institutions, while the Statute of APV provides additional safeguards to minority rights. No major issues regarding the violation of the rights of the Hungarian community have been reported in recent years, though some smaller problems, such as representation in the public administration and availability of textbooks for all levels of education, persist.

Since the mid-2000s, Serbian law has exempted political parties registered as national minority parties from the 5% electoral threshold (3% since 2020). In early 2020, electoral laws were amended again, stipulating that, if a minority list receives less than 3% of the vote, its number of votes is increased by 35% before applying the D’Hondt system, making it easier for minority parties and coalitions to cross the “natural threshold”, but also to win more seats in the National Assembly than was previously the case.

As of February 2022, there are five political parties representing the Hungarian national minority in Serbia in the Register of political parties managed by the Ministry for State Administration and Local Self-Government. This political pluralism is somewhat illusory given the dominance that the Alliance of Vojvodina Hungarians (Vajdasági Magyar Szövetség – VMSZ).

Ever since the 2007 parliamentary elections, the first held under the aforementioned exemption rule, VMSZ has been the only party representing the Hungarian minority to enter the National Assembly of Serbia. Thanks in part to the boycott of the majority of opposition parties, and in part to the changed rules multiplying the votes received by minority parties, VMSZ achieved the highest representation ever in the 2020 parliamentary election, winning nine seats (of 250). MP Elvira Kovács was one of the Vice Presidents of the National Assembly and Chair of the Committee on European Integration in 2020-2022. Bálint Pásztor, another prominent MP, has been chairman of the VMSZ group since 2020. 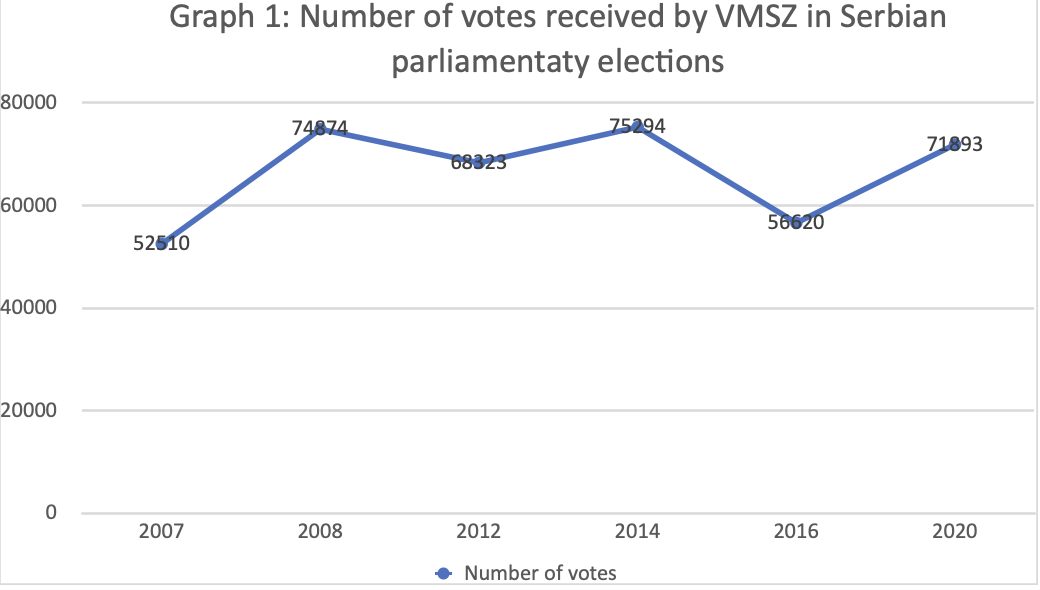 Since the 2020 provincial elections in Vojvodina, VMSZ is also the only Hungarian party in the APV Assembly, with 11 seats. Party president, István Pásztor, has also served as president of the APV Assembly since 2012.

VMSZ has also been dominant in elections to the National Council of the Hungarian National Minority. This institution is, according to the Law on the National Councils of National Minorities (2009) serves as a platform for minority communities to exercise their autonomy in culture, education, information, and official use of languages. The Councils have the power to propose and follow the implementation of the relevant laws, nominate representatives to other institutions, and, crucially, establish institutions, associations, and foundations in the areas of culture, education, and information.

In the 2014 elections, the Magyar Összefogás (Hungarian Unity) list dominated by the VMSZ party winning 31 out of 35 seats and 46,753 votes. In 2018, the list won 30 seats and 39,166 votes. According to the website of the VMSZ party, 13 members of the National Council are party members. Jenő Hajnal, elected on the Hungarian Unity list and nominally independent, has been president of the National Council since 2014.

The dominant position of the Alliance of Vojvodina Hungarians is comparable to the position of Fidesz in Hungary and the Serbian Progressive Party (SNS) in Serbia. The VMSZ maintains close ties and cooperation with both. It is considered a sister party of Fidesz, with whom it had shared membership in the European People’s Party (EPP) until the expulsion of the

former in 2021. VMSZ member Andor Deli, who also holds Hungarian citizenship, has been a Member of European Parliament, elected on the Fidesz list, since 2014.

The day after the June 2020 Serbian elections, VMSZ leader Pásztor met with Prime Minister Viktor  Orbán in Budapest, thanking him for “the immense support they provided to Vojvodina’s Hungarians for a historic victory.”

A week before the vote, Orbán called on the Hungarian community to go to the upcoming elections in an interview with Pannon TV in Subotica. His words had an additional weight in the context of the boycott of the elections by the opposition in Serbia.

Ties between VMSZ and SNS have also deepened over time. Despite the fact that VMSZ was a part of the coalition led by the Democratic Party (DS) in Vojvodina until 2016 (while SNS led the government on the national level), coalitions between SNS and VMSZ were subsequently achieved on all levels of government and have been functioning smoothly for years. In both 2017 and 2022, the Alliance of Vojvodina Hungarians supported the presidential candidacy of Aleksandar Vučić. In the previous presidential elections, in 2008 and 2012, the party ran independently, with Pásztor as its candidate.

During the visit of Orbán Viktor visit to Belgrade in May 2020, President Aleksandar Vučić said that he was very grateful to Pásztor, who, he said, had established “bridges of friendship” between the two countries.

The only other Hungarian party that is active nationally is the Democratic Community of Vojvodina Hungarians (Vajdasági Magyarok Demokratikus Közössége - VMDK), the oldest Hungarian minority party, currently led by Áron Csonka. In 2016, the party, as a part of a coalition, won 1,71% votes and two seats in Vojvodina provincial elections (compared to 4,88% and six seats won by VMSZ). In 2020, it joined the opposition boycott on all levels, and currently is a part of the opposition coalition United for the Victory of Serbia, which is participating in the parliamentary elections.

Other registered Hungarian parties participated neither in 2020 parliamentary nor in the 2020 provincial elections. Several municipal elections in Vojvodina were contested by groups of citizens representing the Hungarian community in opposition to the VMSZ. Most of them won several seats in the municipal assemblies.

Hungarian Movement (Magyar Mozgalom), led by a collective presidency, is not a registered political party, but operates as a political subject since its establishment in 2015. The Movement participated in the 2018 elections for the National Council of the Hungarian National Minority, winning five seats. It is participating in the 2022 parliamentary election within the Moramo opposition coalition.

Primary information sources in the Hungarian language in Serbia are publicly owned. Radio-Television of Vojvodina (RTV) is a public broadcaster with minority language programs, including Hungarian, primarily on the channel RTV 2. On the other hand, the daily newspaper Magyar Szó, weekly Hét Nap, and Pannonia Foundation, which is the publisher of Pannon TV, Pannon radio, and media portal. The founder of these media companies is the National Council of the Hungarian National Minority.

According to 2021 research by the Centre for Investigative Journalism of Serbia (CINS) within the regional project ‘Hungarian Money, Orbán’s Control,’ media founded by the Council received significant funding from the Bethlen Gábor Foundation, owned by the Hungarian state.

The investigative story published details how the editorial policy of these media might have been influenced by the funds that were received.

“None of the three media, Magyar Szó, Hét Nap and RTV Pannon, is critical of Orbán, VMSZ and its founder, the Council, but often convey statements of these institutions. In the 2018 Hungarian parliamentary election campaign, Magyar Szó portrayed the opposition as a group of people whose only goal was to overthrow Orban and seize power. In addition, they transmitted Pastor’s statements that citizens should vote for a coalition led by Orban’s party,” CINS reported.

According to the publicly available data from the Bethlen Gábor Foundation, from 2012 to 2019, Pannon TV received more than 7 million Euros, while Magyar Szó received 1,6 million Euros from 2011 to 2019.

The situation in Hungarian-language media is not dissimilar to the general media landscape of Serbia, which is dominated by the ruling Serbian Progressive Party. National television channels and the majority of newspapers are largely biased in favor of SNS and President Vučić, and are also presenting Hungarian officials, mostly Prime Minister Orbán and Foreign Minister Péter Szijjártó, in positive light. In fact, Viktor Orbán is the European leader with the highest approval rate in Serbia.

In addition to Hungarian-language media, there are several influential Serbian regional media outlets in Vojvodina. Some of them, including Radio-Television of Vojvodina, TV Pančevo and TV Novosadska are biased in favor of the ruling parties, while others, such as 021.rs and Kikindske.rs are more critical. Nevertheless, it is safe to assume that some of these media also represent a source of information for at least a part of the Hungarian minority.

The link to the original publication can be found: here.

"Election Monitoring in Hungary and its Diaspora" research is conducted with the support of the International Republican Institute's Beacon Project. It is conducted in Hungary and select countries with a significant Hungarian diaspora: Romania, Serbia, Slovakia and Ukraine. The opinions expressed are solely those of the authors and do not reflect those of IRI