A poll of residents of Slovakia released today by the International Republican Institute’s (IRI) Center for Insights in Survey Research reveals distinct vulnerabilities to Russian influence among Slovaks on issues of security, identity and media consumption.

“This poll paints a disturbing picture of public opinion in Slovakia on issues ranging from the weak support for key transatlantic partnerships to the lack of skepticism towards Russian disinformation,” said IRI Regional Director for Europe Jan Surotchak. “If these trends continue, there is a real danger that Slovaks may be used as pawns in Russia’s gambit for increased influence over Europe.”

More than half (53 percent) of respondents think that NATO is no longer as important to European security as it once was, and say that Slovakia’s approach to security should be “rethought.” Seventy-four percent agree that Russia should be considered a “partner” in European security, and a combined 73 percent favor neutrality over choosing to ally with either NATO or Russia (27 percent “strongly agree;” 46 percent “somewhat agree”).

The poll also reveals that a significant number of Slovaks (41 percent) feel that Russia has taken the side of traditional European values against Islamic and other non-European cultures. “This is a weakness that Moscow can easily use to exacerbate the conservative/liberal divide on this issue,” said IRI Regional Program Director Miriam Lexmann.

In addition to skepticism towards transatlantic institutions such as NATO and the belief that Russia defends “European values,” the poll suggests that Slovaks are vulnerable to Russian disinformation. Among the respondents who consume alternative media, 38 percent don’t believe that Russia funds alternative news sources, and attribute such a charge to “anti-Russian interests”; additionally, 38 percent “don’t care” if such sources are funded by Russia because “they tell the truth”.  Forty-five percent trust their friends and colleagues as their main source of news over mainstream news outlets, indicating a corrosion in trust for traditional news sources and an openness to unconventional sources.

This survey was conducted on behalf of the Center for Insights in Survey Research by Ipsos Slovakia. Data was collected between March 8 and March 21, 2017 through face-to-face interviews. The total number of interviews was 1,024, and the sample is comprised of residents of Slovakia aged 18 to 65 years. The margin of error is plus or minus 3.23 percent with a 95 percent confidence level. Figures in charts and tables may not add up to 100 percent due to rounding error and/or multiple choice answers. 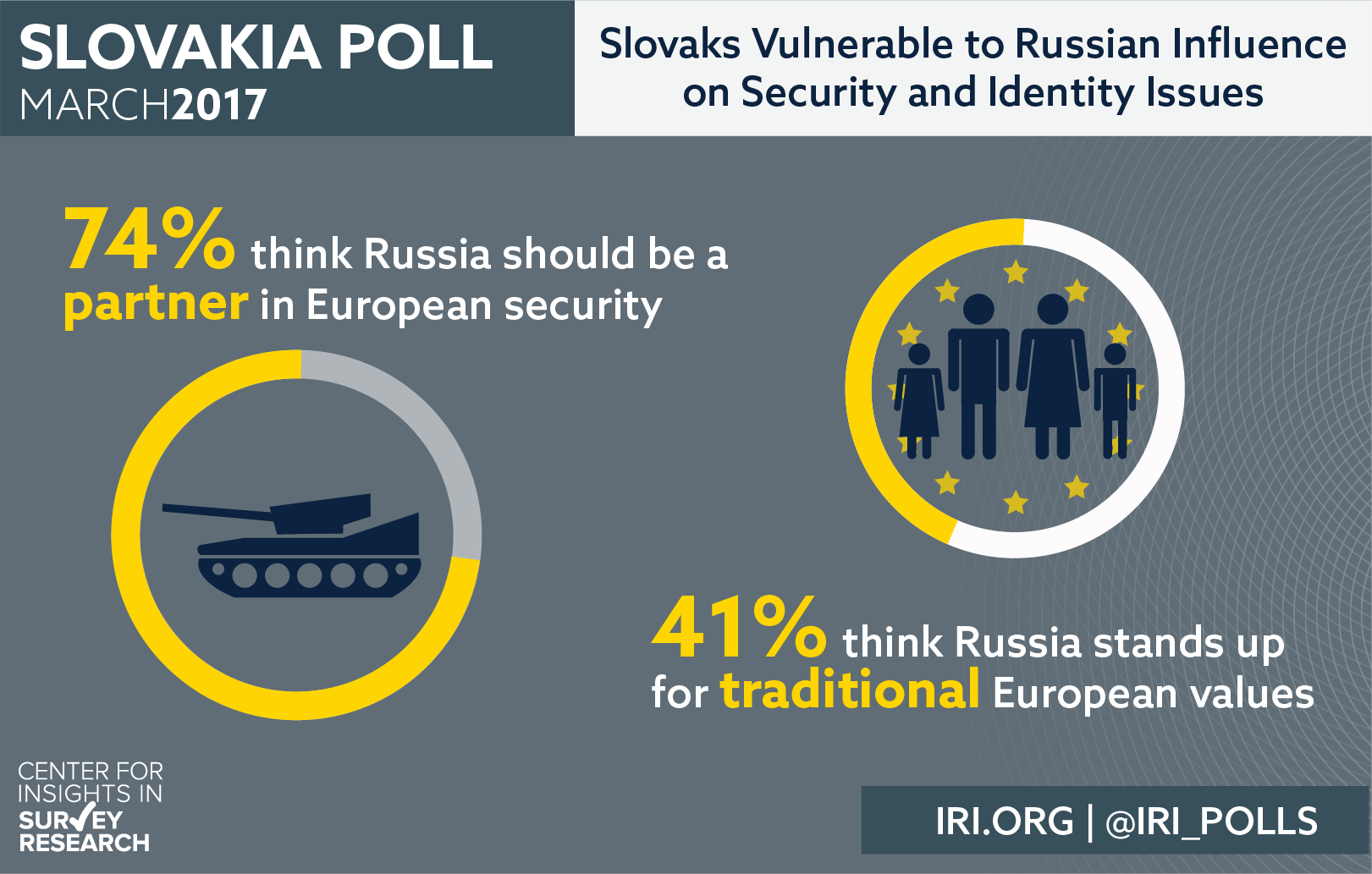