Local elections were held in Mostar, Bosnia and Herzegovina (BiH) for the first time since 2008. IRI's Beacon project, in cooperation with the Balkan Investigative Reporting Network (BIRN) in Bosnia and Herzegovina (BiH), monitored online media and social media coverage of topics and actors in the run up to elections on December 20. The monitoring sought to identify divisive or nationalistic content and the potential influence of foreign actors on elections and politics in Mostar. The data for this flash report was collected using the Pulsar media monitoring tool and contains data from BiH based websites as well as Facebook. Observations are based on hand coded data covering the period from November 20 to December 16. Media monitors are continuing to monitor through December 27 for a final comprehensive report.

Since 2008, the ruling Bosniak and Croat parties were unable to agree on new election rules. Following the ruling of the European Court for Human Right (ECHR), the leaders of the Party of democratic action (SDA), Bakir Izetbegović, and Croatian Democratic Party (HDZ BiH), Dragan Čović, finally reached an agreement in June 2020. Thirty-two certified political entities participated in the elections which were closely followed by local, nation and international media.

COVERAGE OF THE MAIN ACTORS

BH Blok Mostar coalition (BH Block Mostar), which consisted of Naša stranka and Social democratic Party (SDP BiH), had the largest activity on Facebook and the largest number of engagements. The political movement promotes multiethnicity, unity, and indivisibility, garnering the party significant support in the majority of Facebook comments. However, of all political entities and coalitions it also had the largest number of negative comments. Most of the negative reactions were directed at the main candidate, Irma Baralija, who stands behind the ECHR lawsuit that  led to the elections. Supporters of pro-Bosniak parties, such as SDA, questioned Baralija’s political campaign and tried to discredit her by linking her to HDZ. Researchers noted a large number of discriminatory speech comments based on ethnic, sexual or religious grounds. Of 58 such comments, two were based on religion, 19 on gender and 37 on ethnicity.

Koalicija za Mostar 2020 (The Coalition for Mostar 2020), consisting of center-right Bosniak SDA and like-minded Party for a better future (SBB), Democratic Front (DF), Party for BiH (SBiH) and Bosnian Patriotic Party (BPS), was active on Facebook, but without a large number of comments in the form of support or criticism. There was significant amount of support from online media, both in the form of positive stories on the Coalition as well as re-publishing the Coalition’s content and announcements. Media monitors noticed a large number of Facebook pages that published its content and called for support of its candidates while criticizing the BH Blok Mostar coalition and its main candidate Irma Baralija. It is interesting that these media and pages, as well as the Coalition for Mostar, barely criticized parties and coalitions gathered around the biggest Croat party - HDZ. The criticism reached neither the amount of content nor the level of explicitly divisive language experienced in previous local and national elections.

Ostajte ovdje - zajedno za naš Mostar (Stay here – Together for Our Mostar), which consisted of Union of Independent Social democrats (SNSD), Serb democratic party (SDS) and Serb associations from Mostar, openly invited Serbs from Mostar to unite and vote for this coalition. The coalition called on citizens to vote for Serb candidates – the only legitimate representatives of their people. When Milorad Dodik (leader of SNSD and current Chair of BiH’s Presidency) visited Mostar during the campaign, he mentioned an idea of a “third entity”*, raising the issue in a meeting with Dragan Čović (leader of HDZ) whose party had earlier discussed the option of such a new entity, which would have Croat majority. There was noticeable rhetoric on Facebook pages and comments from citizens (mostly on websites and pages related to Ostajte ovdje coalition) about how Mostar used to be mostly inhabited by Serbs and how it should return to that.

The HDZ political party increased its activity on Facebook and in the media during the last week of the election campaign. HDZ’s content mostly promoted its candidates and political program. In the past the center-right Croat party often openly promoted interethnic division, however such language did not dominate the content it produced during this campaign. HDZ did not call openly for a third entity, but allowed proxies, such as [veterans union] to call for defending what was won in the war and refer to Mostar as the "capital city" (for example add the title). HDZ did not attract many comments on Facebook, neither in support nor in the form of criticism. Dissent between HDZ and SDA, previously noticeable in BiH politics, didn’t dominated the Facebook content posted by HDZ.

Monitors found direct influence of foreign actors only in case of HZD. Tomo Medved, Croatian Deputy Prime Minister, senior general of the Croatian army and minister of Croatian veterans, openly appealed to Mostar Croats to vote for the HDZ.

The results of the monitoring showed that online coverage of Mostar elections is still dominated by ethnicity. The topic was spotted more than 360 times in the monitoring. However, the narrative of ethnicity-based politics did not altogether follow ethnically divisive rhetoric seen in previous elections in the country, as there were only a few direct attacks between the parties representing the dominant ethnicities. The difference is that the comments and divisive language were less explicit and not directed mostly between HDZ and SDA but towards other parties, such as Naša stranka. 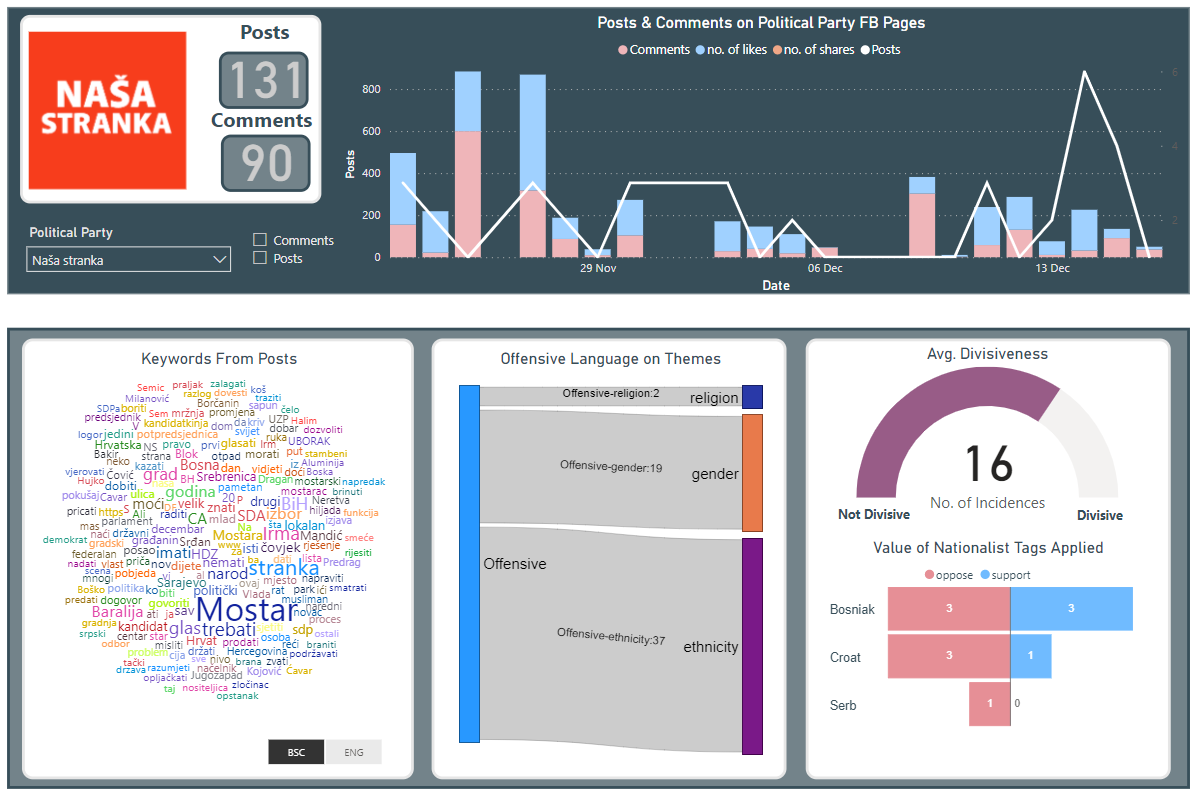 Both HDZ and the Ostajte ovdje coalition have called for unity within members of their respective ethnic groups, while SDA and its supporters focused rather on targeting Naša Stranka and its candidate. Croat and Serb representatives called for unity within their ethnic groups in order to not scatter the votes. Bosniak parties were not united in such strategy and the BH Blok Mostar was criticized by other Bosniak parties for scattering the votes of Bosniaks with their multiethnic program.

The data did not reveal significant, apparent, foreign influence, besides the abovementioned appeals from Croatia. The EU as a topic was mentioned frequently, and dominantly with positively and in relation to topics related to the EU’s support to Mostar as a city and elections.